Here are a couple of 2009 photos of the Lusaka-Chirundu road, another problematic Chinese construction project, this one a key link between Zambia and its southern neighbors. China Henan was the company in this case. A hat tip to Wei for this story.

This project -- along with the crumbling Angola hospital -- was part of this week's Economist story on China and Africa. The Economist reported that the "The Chinese-built road from Lusaka, Zambia’s capital, to Chirundu, 130km (81 miles) to the south-east, was quickly swept away by rains." Well, I don't think the entire road was quickly swept away by rains, but clearly a chunk of it was.

For another Zambia story on the heavy pressure some of these roads are under, see this Lusaka Times story. Researchers: Zambia provides a wealth of examples of comparative road construction. In this story from 2005, we can see the mention of a Chinese company, a local firm (Sable) and a South African company: Steffanutti and Bressan, all with similar contracts. What an interesting summer research project: comparative analysis of the state of these Zambian roads today, based on contracts awarded in 2005.
Posted by Deborah Brautigam at 5:17 PM 21 comments:


China's State Council has released its first official report on China's foreign aid program, providing the most authoritative figures on Chinese aid to date. As I told the Associate Press's Gillian Wong, this is a very big step, and should be welcomed. I will look carefully at this report and compare it with my own analysis in The Dragon's Gift (updated for the 2011 paperback, just released in the UK) once I have a minute in the middle of end of semester demands and deadlines ... (how does Chris Blattman manage?!)
Posted by Deborah Brautigam at 12:07 PM No comments:

Last year we learned that Luanda General Hospital, built by Chinese company COVEC under China's aid program (not under China's multi-billion dollar line of oil-backed credit) had developed severe cracks and was closed, with patients living in tents on the grounds. A critical op-ed on Chinese engagement in Angola published recently in al-Jazeera by Angolan human rights activist and journalist Rafael Marques de Morais, led with this story, arguing that many Chinese projects in Angola had problems with quality.

It is not surprising that some of the hundreds of projects constructed between 2004 and the present under what has now become a $10 billion infrastructure program have problems. As Marques de Morais notes, Angola has weak monitoring and enforcement capacities and a lot of corruption: "After all, Brazilian and Portuguese construction companies have expertly exploited this environment for decades, leading Angolans to create a specific lexicon for the resulting public works: disposable roads, Styrofoam bridges, facade works, etc." China also has a lot of corruption in infrastructure at home, and infrastructure is known worldwide as a sector rife with corruption.

As we know, a Hong Kong based company, China International Fund, is also involved in infrastructure in Angola, although the Chinese government has officially distanced itself from CIF, telling Marques de Morais: “CIF is a company that has no construction record or credentials.” I wouldn't be surprised to find problems with infrastructure built under CIF.

But I was surprised about the hospital. As I noted in The Dragon's Gift, the Chinese have a long-term sense of responsibility for projects financed under their aid program (but not export credits) because aid is an important tool of diplomacy. Because of this, the quality of projects financed under the official aid program is usually very good, and these projects often seem to have life-time guarantees. I looked into what happened in the case of Angola's Luanda General Hospital. Here's what I found.

The decision to build the 100-bed $8 million Luanda General Hospital was made in 2002, and after tenders in China, COVEC won the bid and constructed the building between July 2004 and February 2006, " using 90 percent local labor."  On his visit to Angola in 2006, Chinese Premier Wen Jiabao visited the hospital to officially open it. In June 2010 serious cracks developed in the walls. The patients were evacuated, the hospital was closed, and the Chinese government dispatched a team to investigate.

Their conclusion was that the problem was (the Chinese official claimed) partly Chinese and partly Angolan. According to the contract, apparently, the Angolans were supposed to provide geological survey data for the location, but this data was not accurate, and therefore the design by the Chinese architects was flawed. (Seems to me that given weak state capacity in Angola, this basic task should not have been left up to the Angolans.)

A Chinese official told me: "After several rounds of discussion both sides have reached consensus on how to address the problems. The Chinese side will build some temporary wards and sewage systems for patients to ensure the operation of the hospital. Then the maintenance work and expansion of the hospital will begin." The Chinese government will finance the new construction.

Will COVEC be given the job, or will another Chinese company do the work? That's not clear, but what is clear is that one messed-up hospital project has cast a particularly large shadow over hundreds of other less visible Chinese construction projects in Angola that do not seem -- so far -- to have had such dramatic flaws. Yet what is also clear is that the environment for construction in Angola, as Brazilian and Portuguese companies have found, tends to produce infrastructure with lives that are "nasty, brutish, and short". Perhaps it's time for a new international NGO to focus on monitoring transparency and accountability in public infrastructure projects. "Engineers (and Architects) without Borders"?
Posted by Deborah Brautigam at 11:36 AM 20 comments: 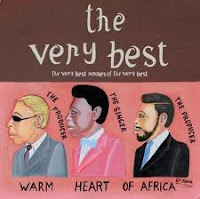 This has very little to do with China and Africa -- call it New York City and Africa -- but swamped as I am with grading papers, article deadlines, traveling to give talks, thinking what I will say during my seven minutes on a World Bank/IMF Annual Meeting panel this week, I want to share 3:42 minutes of escapism: a video of The Very Best's hit song Warm Heart of Africa with guest artist Ezra Koenig of Vampire Weekend joining Esau Mwamwaya of The Very Best. This sweet and jolly song combines pieces of my life (Columbia University and Malawi where my South African husband lived for five years). Enjoy.
Posted by Deborah Brautigam at 12:54 PM 4 comments: