My new book, Will Africa Feed China?, is now available on Amazon or at Oxford University Press. You can read excerpts in All China Review and on Quartz.

On Thursday, October 29th, 2015 I will be speaking about the book in a roundtable discussion at Johns Hopkins SAIS in Washington DC. Professor David Lampton, Director of the SAIS China Studies Program, will be moderating, and Dr. Amadou Sy, Director of the Africa Growth Initiative at the Brookings Institution, and Professor Ling Chen, Assistant Professor of International Political Economy at SAIS, will be discussants. RSVP here: https://www.eventbrite.com/e/will-africa-feed-china-tickets-18985231338 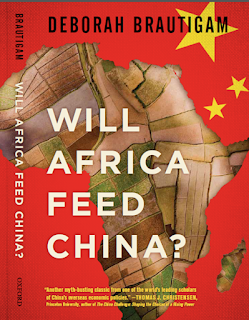 Will Africa Feed China?
Is China building a new empire in rural Africa? It seems a perfect match: the country with the largest population and the continent with the largest remaining reserves of arable land. Few topics are as emotionally charged as the belief that China is aggressively buying up huge tracts of prime African land to grow food to ship home. Will Africa Feed China? probes the myths and surprising realities behind the headlines.
Posted by Deborah Brautigam at 3:25 PM No comments:

A new policy brief by China Africa researcher Jing Gu and R. McCluskey at IDS Sussex asks "Is China’s Role in African Fragile States Exploitative or Developmental?"
The abstract notes:"China’s increasing engagement in Africa has generated heated debates over the extent to which its activities are exploitative or developmental. There is particular concern over China’s impact on governance in fragile states. However, these debates often make generalisations and leave out African agency.This Policy Briefing takes a closer look at Rwanda and the Democratic Republic of Congo, and finds that there is a large gap between China’s policy and practice. It finds that the ways in which African actors promote, respond to and negotiate its engagement is crucial in shaping the extent to which China contributes to development."

A h/t to Winslow Robertson, via Twitter @Winslow_R
Posted by Deborah Brautigam at 6:18 PM No comments:

Whatever Happened to the $9 Billion China-Congo Deal?

Bloomberg has a story today that updates the China-DR Congo Sicomines Tale -- the long-running story of an investment and resource-backed loan deal first mooted around 2004, and still not in production. This is the formerly $9 billion+ 2007 deal that had the World Bank and the IMF in an uproar, concerned about the DRC's taking on additional sovereign debt just when it was asking to have its World Bank/IMF loans cancelled under the HIPC program. Under pressure from the IFIs, the deal was eventually scaled back (in 2009) from two to one $3 billion line of China Eximbank credit, backed by future copper exports, plus a complicated financing deal to bring the abandoned copper mine back on line. (This was estimated to cost at least an additional $3 billion). The sovereign guarantee was also dropped. And what is the status today?

Moise Ekanga, executive secretary of the Office for the Coordination and Monitoring of the Sino-Congolese Programme, announced that the DRC had received "$1.5 billion for Sicomines and infrastructure projects including road construction and hospitals, but funding and implementation have been more difficult than expected ... with projects having faced long delays."

A long-mooted hydropower project, Busanga, is now to be financed out of the copper-backed credit line (50%), with the Chinese partners in Sicomines providing the rest. And Sicomines is expected to produce its first copper cathodes by the end of October. Only seven years after the deal was signed.

FOCAC is Coming to South Africa: Are You Ready?

The Forum on China Africa Cooperation (FOCAC) will meet for the sixth time December 4-5, in Johannesburg, South Africa. If you've always wondered: what is FOCAC? now is the time to learn.
One great resource is the 2010 book, The Forum on China-Africa Cooperation (FOCAC) by Professor Ian Taylor (right), available in a Kindle version.
Or, you can visit the new website Reporting FOCAC co-sponsored by those two great groups, the Wits China-Africa Reporting Project at Witwatersrand University in Jo'burg, and the China Africa Project hosted by journalists  Eric Olander and Cobus van Staden.

The new website is a work in progress, so visit frequently to see what updates they're delivering.
Posted by Deborah Brautigam at 8:59 PM 1 comment: