This guest post is by Jyhjong Hwang, the Senior Research Assistant at the China-Africa Research Initiative at Johns Hopkins SAIS. 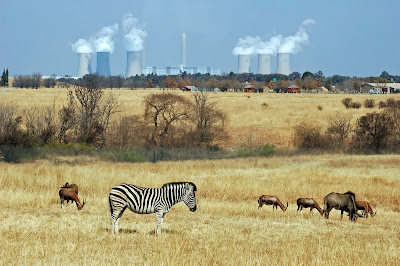 This is the story of how five Chinese-financed coal power stations in Africa became 50.

On July 21, 2017, the New York Times published an op-ed titled, "China's Other Big Export: Pollution," written by Paulina Garzon at the Wilson Center and Leila Salazar-López of Amazon Watch.  While the op-ed focused mainly on Latin America and the Caribbean, one paragraph using our CARI data on Chinese official loans to Africa caught our attention:


"China is worsening the climate crisis with its financing elsewhere as well. From 2000 to 2015 China extended $94.4 billion in loans to Africa, fueling extractive industries like oil, minerals and timber; the expansion roads [sic] and ports to get those raw materials to market; and dirty energy like large dams and power plants. Beijing is building and financing some 50 new coal plants across Africa." (Emphasis added).

China-Africa Research Initiative (CARI) has a bone to pick with just about every sentence of this paragraph. While we are glad that our data is being utilized, we would like to set the record straight regarding the nature of these loans – and in particular, the nature of Chinese involvement in African coal stations. We show below how data and information get distorted as they are passed from source to source, rephrased, paraphrased, and taken out of context.


1.    Do Chinese loans go to “fueling extractive industries like oil, minerals, and timber”?


Mining (oil and minerals combined) constituted only 9.6% of all Chinese loans in Africa. And we could not identify even one loan-financed timber project. The impression that Chinese loans are primarily given to foster extractive industries like oil, minerals, and timber is not borne out by our data.

2.    Do Chinese loans finance “roads and ports to get those raw materials to market”?


Well… the Chinese do finance a lot of transport projects. Roughly 32% of all Chinese loans went to the transportation sector. However, many of these projects have more to do with Africa’s own infrastructure deficits and little to do with natural resource exports. For example, land-locked Ethiopia, with almost no oil, minerals, or timber to export, borrowed billions to build a freight and passenger railroad from its capital, Addis Ababa, to a harbor in the neighboring country of Djibouti. Ethiopia will be using this infrastructure to export manufactured goods and to import fossil fuel from the global markets. At least 17 countries have borrowed to build or renovate airports. Assuming that all Chinese-financed transportation projects are geared toward China’s needs for raw materials is a gross simplification. As the Ethiopia case shows, complex factors related to global and domestic trade, urbanization, population density and distribution, and local politics all shape decisions around road and port construction – not just the presence of resource commodities.


No, and not even close – but let’s first clear up some definitions to understand what we mean. As we will further explain below, there are currently only five coal-power complexes in Africa that have received any confirmed Chinese financing. The misunderstanding here lies in a point of confusion over terminology when discussing coal power stations, leading readers to infer that 50 new complexes are rising from the ground thanks to Chinese money. However, this is absolutely false, as one must distinguish between “units” and “stations”: individual coal power stations usually have multiple generating units (i.e. individual turbines and generators). For example, the Morupule B Power Station in Botswana has four units, each generating 150 MW. Therefore, "100 coal-generating units" will always mean fewer than 100 coal power stations.

To further complicate matters, the commonly-used term “plant”, when referring to coal power production, varies in definition: while in layman’s day-to-day discussion, "power plants" and "power stations" are often understood to be the same thing (this is the definition used in the NYT op-ed), other sources (such as the research project CoalSwarm) use "plants" as synonymous with "units", while referring to entire (often multi-unit) complexes as "stations". For clarity’s sake, we will avoid using the word “plant” in this post, and will opt to use the terms “unit” and “station” instead.

So where did the “50” figure originate? We traced the claim to a May 10, 2017 article in the National Geographic article: "As the World Cuts Back on Coal, a Growing Appetite in Africa":

“According to data compiled by CoalSwarm, an industry watchdog, more than 100 coal-generating units with a combined capacity of 42.5 gigawatts are in various stages of planning or development in 11 African countries outside of South Africa—[...] roughly half are being financed by the world’s largest coal emitter: China.” (Emphasis added.)


For their NYT op-ed, Garzon and Salazar-López, appearing to have mistakenly assumed that each coal generating unit is one power station, took the phrases "roughly half" and "100 coal-generating units" and came up with the number 50.
But then what did National Geographic’s source, CoalSwarm, originally mean to say? We tracked down an August 2016 report written by CoalSwarm contributor Dr. Christine Shearer, titled "China’s growing role as funder of Africa’s proposed coal plants", with data from their Global Coal Plant Tracker. The report states that there are:

"42.2 GW of capacity under development on the continent (excluding South Africa) [...] About half of the proposed capacity (21.5 GW) is being supported by Chinese finance [...] totaling 47 units (there are often several units, or plants, within a power station)." (Emphasis added).


CoalSwarm did mean that half of the proposed capacity is Chinese-financed-- not half of the units (or for that matter half of the stations). As noted above, “units” are not standardized in terms of their electricity production capacity (gigawatts)-- it cannot be assumed that half of one is equal to half of the other, as we could for instance be looking at fewer units, but with a much higher output capacity.

CoalSwarm’s specific terminology choices appear to have been lost in the National Geographic article, which uses "plants" and "stations" interchangeably. As a result, this practice was carried forward in the NYT op-ed, where no mention of "units" was made, and "plants" are used to refer to entire complexes. While CoalSwarm does report 47 units with potential Chinese financing, there is no way for readers to understand this merely from the NYT op-ed.

To firmly establish the exact number of coal power stations involved in this discussion, CARI reached out to Dr. Shearer of CoalSwarm, who kindly provided us with their unpublished granular data. CoalSwarm has actually been able to find 17 projects (totaling 47 coal-fired generating units) with Chinese involvement, with the caveat that these 17 "projects are at various stages - China institutions are either actively financing or discussing financing the plants." Thus, 17 is not even the total number of Chinese-financed coal power stations, but an aggregate of coal power stations that have secured Chinese finance, or are in the process of negotiating for it.

Then, excluding projects with financing still under discussion, how many of these projected 17 coal power stations, with a combined capacity of 7.265 GW, actually secured Chinese financing? Below is the full list of confirmed Chinese-financed coal power stations: from 2000 to 2017, we could only find five such projects.

Throughout this whole “telephone game”, from the CoalSwarm data through the National Geographic article and ending with the NYT op-ed, the original data was misinterpreted and distorted, leading the actual figures – five confirmed Chinese-financed projects – to balloon into 50. Such distortions unfortunately reinforce false perceptions and skew the debate, while the data often does not support these assumptions. Terminology and definitions have their importance when discussing technical issues. Knowing that the public is at times confronted with misleading information, we must strive more than ever to ensure that data on such sensitive issues is correctly compiled, analyzed, and circulated.

[1] Botswanan state power company.
[2] Industrial and Commercial Bank of China.
[3] A consortium of private Kenyan businesses that won the BOOT contract for the power plant.
[4] China Export-Import Bank.
[5] South African state power company.
[6] A joint-venture between the Zambian government and a Singaporean company.
[7] Bank of China, a commercial bank with its headquarters in Hong Kong. Distinct from the People's Bank of China, which is the country’s central bank.
Posted by Deborah Brautigam at 2:11 PM 9 comments: