On May 20th I spoke at a World Bank event "China in the World Economy: New Partnerships in Africa." Some of the people speaking (and attending) have been following this topic for a few years now, and they had interesting things to say. Here are a few of them:

On debt sustainability, an official from the IMF confirmed: "The Chinese look at debt very differently [from the IMF]. It's a function of the project investment." He noted that the IMF Board has had "intense debate" on the debt limits policy (a post-HIPC innovation). "The debate has been heavily influenced by the way China has been approaching Africa. And that's all to the good."

An official from Kenya noted, "It's still early days" in this relationship, but "China is the most pragmatic development partner operating in Africa today." Someone related a story about Chinese pragmatism. A delegation from Tanzania went to Beijing with a list of vague ideas amounting to $10 bn. The Chinese looked at the list and said: "There are no bankable projects here."

Our panel had many of the same old questions about neo-colonialism, do Chinese import all their own workers, are they the largest investor, positive/negative influence, African opinion, and so on. An important point concerned procurement practices. Many Chinese companies are getting contracts on a no-bid basis. This tends to inflate costs. Competition is good. Transparency is good.

At last, a team of experienced researchers with extensive experience on official development assistance (and foreign aid), and with deep background on China, the OECD, and the Asian approach to aid and cooperation more generally, has come up with an estimate of China's total annual official development assistance (ODA) in 2013 of $7.1 billion. This fits well with the latest glimpse into official figures, when a Chinese official let slip in April 2013 that China's official aid was about $6.35 billion, and with my own estimates.

One of the gnarly questions in estimating Chinese aid is how to treat subsidized (preferential) export credits, which like everything else out of the Chinese policy banks, seem to be growing rapidly. Kitano and Harada follow the method required by the OECD's Development Assistance Committee (DAC), which states that export credits, no matter how concessional, cannot be considered -- by definition -- official development assistance for DAC members, as their main purpose is the promotion of a country's exports. Of course they can be counted as foreign aid, just a military aid is foreign aid. But to be comparable with the OECD countries, neither of those two should be mixed up with ODA.

From what I can see, the Chinese also follow this recommendation. Though many in China do not understand the difference between the two (this is also true for many in the OECD), the budget lines that subsidize the two different loans (concessional foreign aid loan, or "you hui dai kuan" and preferential export buyer's credits, or "you hui mai fan xin dai") are also separate, and only one, concessional foreign aid loan, is included in Chinese announcements of their foreign aid.
Posted by Deborah Brautigam at 9:48 AM No comments:

Interesting, detailed, and alarming story on a Chinese quack and the profitable, deadly pyramid scheme he has rolled out in Uganda:

"200,000 Ugandans have signed up to a company believing it will cure all their illnesses and help them make a fortune. But it is more likely to do the opposite."

This is the kind of balanced, important, deeply researched reporting that China Africa specialists long for. I particularly like the interview with an authentic Chinese doctor who is at first amused by the claims being made and then, as he learns more, genuinely alarmed by their implications.

Posted by Deborah Brautigam at 9:58 AM No comments: 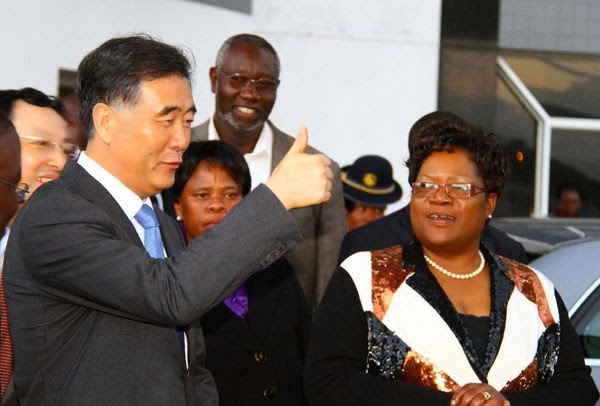 In southern Africa, many people believe that Chinese companies are exempt from the indigenization policy in Zimbabwe -- a requirement that firms submit plans as to how they will achieve 51 percent Zimbabwean ownership over a set period. I don't think Chinese firms have a blanket exemption. True,  I have read that the tobacco buyer Tian Ze -- which has been working with indigenous Zimbabwean tobacco farmers in a contract farming arrangement, supplying inputs and credit, and purchasing their crop -- was given an exemption. There may be some other Chinese companies that have negotiated exceptions just as some other foreign firms have been trying to do, but despite the oft-stated "Chinese are exempt" belief, the evidence suggests that Chinese firm have no blanket exemption.
In fact, a Chinese language website, "Zimbabwe Forum for Chinese," reprints several notices from the Chinese embassy, reminding Chinese readers about the indigenization policy, which they have translated into Chinese. The policy covers a number of economic sectors. To summarize one of the notices, which refers only to a set of 14 sectors reserved for Zimbabwe citizens: the embassy states:

"Zimbabwe's Indigenization and Economic Empowerment Act "(2010 Amendment) and Localization and Economic Empowerment Ministry No. 66 File 2013" provide that commercial activities in the reserved sectors must obtain localization certificates before January 1, 2014. Businesses are required to submit proof of localization options or plans. Failure to comply will be punishable by a fine, 3 to 4 months imprisonment, or both. The Chinese Embassy in Zimbabwe reminds those Chinese citizens engaged in reserved sectors, including retail and wholesale, to fully understand and comply with the relevant laws and regulations in time, in order to avoid unnecessary trouble and losses. The 14 sectors include: 1. Agriculture: food and cash crops of primary products; 2. Transportation: passenger buses, taxis and car rental services; 3. retail and wholesale; 4. barber shop, a hairdresser and a beauty salon; 5. Employment Agencies; 6. Real estate agent; 7. valet service; 8. grain milling; 9. bakery; 10. tobacco grading and packaging; 11. tobacco processing; 12. advertising agency; 13. milk processing; 14. The local art and handmade products marketing and distribution.

Comments on the website reveal a lot of confusion about the policy and how it will be implemented, but the message from the embassy is consistent: obtain your localization certificate in time or risk fines and imprisonment.

Posted by Deborah Brautigam at 10:12 AM No comments: