What is Africa exporting to China? A reader asked me: why are 26% of African exports to China reported as "unspecified"? This HS 98 "Special Classification Provisions, Not elsewhere specified" category has grown hugely over the past few years. I've pasted the top four imports in the trade data below (all in millions). In 2007, this category was about 1% of total imports. By 2013, it's up to 25%. What is in this category? Readers' insights welcome. (updated to include the Chinese definition for HS 98 -- each country can define their own contents for HS 98)

UPDATE April 18, 2014:  China's definition of HS 98 from China Customs, below (thank you Bi Hanning). Still not clear why it has grown so large, but I suspect many importers are simply classifying imports as "other unclassified commodities"...

UPDATE April 28, 2014: A paper by Africa trade expert Dr. Ron Sandrey, "Assessing South Africa's Trading Relationship with China," also raises questions about this strange gap in data for South Africa's exports to China. He wonders if perhaps it represents exports of gold (although China is itself one of the largest gold producers in the world). Chinese trade experts, do weigh in! 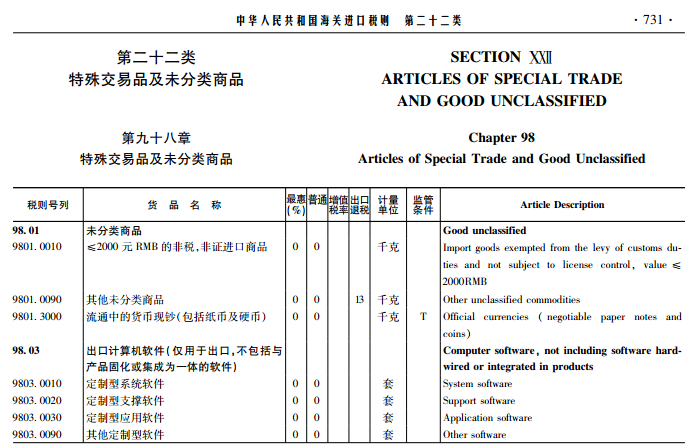 The Paul H. Nitze School of Advanced International Studies (SAIS) SAIS China Africa Research Initiative (SAIS-CARI) will hold an inaugural public conference:  Researching China’s Agricultural Investment in Africa:  ‘Land Grabs’ or ‘Friendship Farms’? May 16, 2014 and private research workshop on May 17, 2014, in Washington, DC at Johns Hopkins University’s School of Advanced International Studies. The goal of the conference is a deeper, comparative understanding of the motives and experiences of Chinese investors; the network of relationships: investors, governments in China (national and provincial) and in Africa, intermediaries and brokers; and the impact of their investments.

Panels will include papers and presentations on:

The conference is free, and open to the public, although seats are limited. We will open Eventbrite for tickets one month before the conference date -- link will be at the website of the SAIS China Africa Research Initiative SAIS-CARI. To reserve a seat in advance, or to request an invitation to the private researchers workshop, please email: SAIS-CARI@jhu.edu.
Posted by Deborah Brautigam at 10:19 AM 3 comments:

Anyone who has been to Luanda knows that the city lacks housing. The hotels are extremely expensive, and researchers have been known to rent a room in someone's house for $100 a day. Angolan president Jose dos Santos pledged to build a million new homes, between 2008 and 2012. Kilamba City was part of that promise. The idea of constructing a new town, Kilamba City, 20 km outside Luanda, where flats would be available for purchase, seemed like a good one.

A Frenchman, Pierre Falcon, the famous architect of the "Angola-gate" arms trade and corruption scandal, owns the company that oversaw the project: Pierson Capital Group. The complex was financed by ICBC, Industrial and Commercial Bank of China, allegedly backed by oil-revenues. CITIC built the flats. A company owned by the state-owned oil firm Sonangol was in charge of marketing the apartments (they would use those revenues to repay the loan). Chinese firms built Kilamba. And then the apartments seemed to stand empty. Visiting Western journalists photographed the long, lonely expanses of buildings. Kilamba City was filled, it seemed, by ghosts.

Until recently. Or so it seems. According to the official Angolan news agency, some 40,000 people moved into Kilamba after their families took advantage of long-term, low-cost mortgages to buy flats with prices ranging from US$70,000 to US$140,000. One account said people are standing in line for days to buy one (photo left).
The news stories on Kilamba, the "ghost town" mainly date from 2012. If it is actually now becoming a thriving town, why hasn't anyone gone back to report on it?

Readers: have you seen Kilamba? Your comments and stories are very welcome.