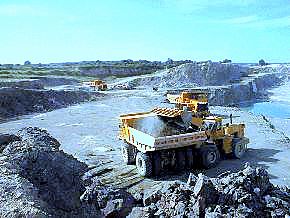 Amos Irwin (Fletcher School) and Kevin Gallagher (Boston University) have a new working paper exploring Chinese mining investment in Peru. These researchers are painstaking and methodical, and build up their findings with extensive fieldwork, interviews, and careful gleaning of news reports. Their earlier research on Chinese finance in Latin America (published at the Inter-American Dialogue, where Sinologist/Latin Americanist Margaret Myers is leading the China and Latin America program) is a model of careful scholarship, so it's a pleasure to see them venturing into a new area. Here's the abstract of the new study:

Chinese investment in Latin America has exploded in recent years, leading observers to worry that Chinese companies may transplant poor labor and environmental practices to the region. In this Discussion Paper, GDAE’s Amos Irwin and Kevin P. Gallagher evaluate the economic, environmental and social impacts of Chinese mining in Latin America and compare that performance to other major foreign and domestic firms in the same sector. Based on new quantitative inspection data from Peru, the researchers find that the Chinese company Shougang Hierro Peru has not performed significantly worse
than its foreign or domestic counterparts. In fact, a US-based firm has been among the most egregious violators of Peruvian and global standards as of late.

Chinese investment in the region is so recent that only one mining company has been operating long enough to assess its impact. Shougang Hierro Peru has been widely denounced for its environmental and social record, which has been decried in the literature as far worse than that of comparable foreign-owned companies. Much of this literature blames a “culture clash,” concluding that Chinese companies operate irresponsibly in Latin America because they are predisposed to poor labor and environmental standards.

Using new government data and historical archives, Irwin and Gallagher find that while Shougang performed poorly on many indicators, when compared to other foreign and domestic mining companies its poor performance has not stood out in recent years. Rather, the Peruvian government has continually failed to force mining companies to comply with their investment commitments, respect government and global standards, or negotiate with their unions.

They conclude that the Shougang case study does not necessarily determine that future Chinese mining companies will be more likely to bring poor environmental or labor practices to Latin America than other foreign and domestic competitors. High social and environmental costs are endemic to mining in Latin America. Consistent with the broader literature on the subject, this study shows that nation-states like Peru cannot count on foreign or domestic firms to self-regulate. To truly maximize the benefits from
natural resource extraction, and to mitigate the risks, nations need to stiffly regulate, monitor and discipline firms operating in the sector—regardless of the firm's origin.

I'm not sure that we have a comparable (published) comparative study of mining investment in Africa, although the Human Rights Watch study in Zambia that I've blogged on came close.  I hope this study will help stimulate researchers working on similar China-Africa issues.
Posted by Deborah Brautigam at 5:52 PM 1 comment:

I've just seen a short article on the website of the Oxford University China-Africa Network stating that Beijing is involved in "more than 100 dams" in Africa.


"Beijing especially is using its formidable technical expertise in hydro-infrastructure and immense foreign reserves to resurrect dam-building overseas: in half of all African countries, from the Sudanese desert and the Ethiopian lowlands to the rivers of Algeria and Gabon, Chinese engineers are involved in the planning, heightening and building of more than 100 dams. The tens of billions of US dollars and thousands of megawatts involved in these projects have so far remained off the radar in the China-Africa debate, but are possibly more consequential for the future of the African continent than the exports of oil, copper and other valuable resources."(emphasis added)

Verhoeven cites a 2009 publication as his source for this statement: Michael Kugelman (ed.), Land Grab? The Race for the World's Farmland. Washington DC: Woodrow Wilson Center for Scholars, 2009. Verhoeven doesn't provide a page number, but I searched through this online publication for "dams" and "100" and found nothing relevant to this claim. Sources aside, this claim is problematic for several reasons.

It's true that there has been a resurgence of interest in building hydropower dams in Africa, and that Chinese banks and construction companies are part of this. (This interest has not been "off the radar" however. I wrote about it in The Dragon's Gift. Peter Bosshard at International Rivers has been following this trend and wrote about it for Pambazuka.)

In 2010, International Rivers released a list of (only) 25 dam projects that were said to have Chinese involvement, in Africa, as of 2008 (map to right).  Although the map and list implied that these were current and active cases, this is what I found (and blogged here on January 28, 2011), on looking into each case:
It does no service to our understanding of this important issue to create yet another stylized picture that appears to be way out of proportion to the reality.

If you write about Chinese involvement in building dams in Africa, why not spend a little time and effort to dig into these cases and come up with numbers that you can stand behind?  Remember what Steven Mufson and John Pomfret, former Washington Post Beijing bureau chief, wrote on February 28, 2010: “inflating the challenge from China could be just as dangerous as underestimating it.” I got that quotation from International Rivers, by the way, and send them a tip of the hat.

Note: This blog posting was slightly revised on January 8, 2012. I removed some snarky language that unfairly generalized about advocacy NGOs. I am impressed by the new work being done at International Rivers and their efforts to push for accuracy.  Anyone reading this blog should also see the comments section for a robust response and explanation from the author, Dr. Harry Verhoeven, who stepped up to the plate to provide more information about his research, and from Peter Bosshard at International Rivers.
Posted by Deborah Brautigam at 4:31 PM 16 comments: