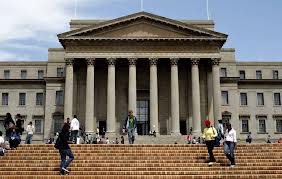 The University of Witwatersrand's School of Journalism in Johannesburg, South Africa, has a program to support journalists who want to do deeper reporting on China-Africa relations. They are now issuing a call for five Chinese journalists who wish to spend 2 to 3 weeks with an African journalist exploring a China related topic in Africa. Applications and description here.

Or in case that doesn't work:
http://www.journalism.co.za/index.php/opportunities/opportunities129/5440-call-for-applications-chinese-journalists-to-participate-in-african-reporting-project-2013.html

This is a great program. I've met Anton Harber, Brigitte Read, and the others leading the program at Wits. They're top notch journalists themselves, and doing a very useful service for unpacking this complicated relationship and getting reality-based reporting. Highly recommended.
Posted by Deborah Brautigam at 10:08 AM No comments:

A Booming Chinatown in South Africa

Another fascinating, detailed read on Africa's new Chinese migrants, by a gifted writer.  Ufrieda Ho tells the inside story of Cyrildene -- one of Johannesburg's two Chinatowns -- and the people who make their lives there. This was the old Jewish neighborhood when my husband lived in Johannesburg. As a political scientist, I have always been impressed by the large number of Chinese associations signposted in Cyrildene. Ufrieda Ho says there are 54. Anyone up for a Robert Putnam-esque study?

So far, President Obama's visit to Africa has produced no comments as sensational as the "new colonialist" remarks directed at China by former Secretary of State Hillary Clinton when she visited Senegal and Zambia in previous years.

Yet during a town hall with young African leaders, the President invoked a similar sentiment in his remark that "I want to make sure that as countries come to Africa, that it’s benefiting Africans. ... If there’s going to be manufacturing taking place of raw materials, locate some of those plants here in Africa."

Well ... I wish whoever prepped him for this trip had at least tried to get an accurate picture. Two chapters of my book cover China's many manufacturing investments across Africa. I've since followed up with fieldwork on Chinese factories in the (raw material) leather processing sector in Ethiopia and several articles about the special economic zones -- focused on manufacturing -- being built by Chinese companies in Africa.

A recent guest post by SAIS student Yuan Li on this blog provides another example. In South Africa, the country where President Obama made this comment, the China Africa Development Fund has seven projects: two are in mining, and five are in manufacturing.

The Chinese state that as of the end of 2011, 15.6% of their Africa investment is in manufacturing and 30.6% in mining, with finance (purchase of 20% of Standard Bank) at 19.5% and construction at 16.4%.*   From what I can see, there is far more manufacturing investment from China than from the United States. This includes raw materials processing: oil refineries in Chad and Niger, copper smelters in Zambia. According to the US Bureau of Economic Analysis, the US total stock of investment in Africa as of end-2011 was $56.6 billion. Mining made up $33.3 billion (59%) and manufacturing only $3.6 billion (six percent).

Yes, despite concerns about costs and competitiveness, manufacturing is going to be vital for Africa's future employmet generation. So, President Obama: what is the US going to do to catch up to China here?
------------

* Chinese Academy of International Trade and Economic Cooperation, "China-Africa Trade and Economic Relationship Annual Report 2012." I don't think this is available online yet. I was given a copy last month by the Chinese embassy in Lusaka.
Posted by Deborah Brautigam at 11:27 AM 7 comments: