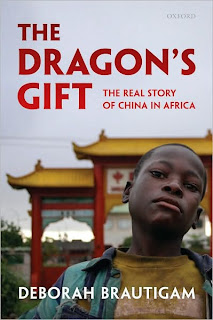 Foreign Affairs featured it in their Books of Note (January/February 2010).

Morning Star gave it a nice review January 5, 2010 (Warning: the reviewer says approvingly that I say that China invests more in African manufacturing than in mining. I don't say that. Not only is that highly unlikely, I have not actually seen any published data on sectoral breakdown of China's African investments since 2000.)

One of my favorite comments so far comes from the title of a story published after I spoke at UCLA:  "Author hits 'reset' on story of China in Africa" (January 27, 2010).

USC China Institute: News & Features "The Dragon's Gift: China in Africa," University of Southern California, January 26, 2010:  "Brautigam presents her thorough “effort to seek truth through facts” in the hopes of revealing the story for what it is—a quest for mutual benefit."

In Paris, Xavier Harel from La Tribune came to the launch and did a story on The Dragon's Gift, February 24, 2010: "Mythes et réalités sur la Chinafrique."

Pamela Glass de St. Antoine from Le Mauricien Weekend reviewed the book on February 21: "New Book by US Author Says Chinese Investment is Positive for Africa."  "... Brautigam challenges what she sees as the myths and misconceptions that China's push into the continent - building dams, highways, railroads, ports hospitals and airports - is bad for Africa and the Africans."

Kevin Kelly, "Chinese role 'superior' to the West's in Africa," The East African, March 1, 2010 story on The Dragon's Gift.

Reviewed March 2, 2010 by Peter Wood, Asian Review of Books, who said: "This is an important addition to the already considerable literature on China-Africa. Policy makers and journalists should read it, and in particular those who run the foreign desks of leading western newspapers and who seem to be peculiarly willing to sacrifice reality to a good headline."

Angilee Shah, in Zocalo: Public Square "How Does China Help Africa?" (March 9, 2010): "If the headlines are any indication, it’s time for a proper China scare ... But Deborah Brautigam’s exhaustive account of Chinese aid and investment in the continent is by no means part of this trend. ...  the book is the culmination of some 30 years of research and experience in both places ... As Brautigam moves us beyond assumptions of exploitation and control of natural resources, a more complex story emerges.

Peter Bosshard in the Huffington Post March 17, 2010:  "Based on her intimate knowledge of China and Africa, Brautigam is able to shatter many prejudices ... her thoughtful and well researched book ... offers surprising insights and challenges us to take a new look at Africa's development."

Stephen Marks, in Pambazuka, "China in Africa: Realism Conquers Myth," (March 18, 2010):  "An account at once scholarly and accessible, combining the puncturing of prevalent myths with a realist approach that does not rely on rosy assumptions [and] ...  documents a number of ‘urban myths’, which her own painstaking research has managed to explode."

Daniel Large, in The Broker, "Great Expectations." (April 13, 2010):  "Her clearly written account successfully weaves together knowledge of the African and Chinese contexts, overcoming the prevailing divide in the academic literature between those familiar with either Africa or China. ...Any book claiming to tell ‘the real story’ sets its standards high, but this one succeeds admirably. For those interested in China–Africa relations, it enriches the field, defines new research standards and is constructively provocative. For those new to the subject, it is an essential text about a compelling, increasingly consequential relationship."

Rob Crilly, April 14, 2010 in Irish Times:  "Damning View of Western Aid to Africa Puts Chinese Rogue Status in Perspective."  "... a compelling argument. ... the inescapable conclusion is that China may not be the rogue donor of popular imagination."

Louise Windfeld-HØeberg, in the Danish newspaper Weekendavisen, April 16, 2010: The review is in Danish, but according to Google Translator, it seems to conclude: "Brautigam is also an unusually eloquent scholar with a sharp-edged, almost journalistic approach to her material, making The Dragon's Gift not only an enthusiastic and engaging book, but a pure joy to read."

Prof. Sean Burges in International Affairs, v. 86, n. 3, 2010:
"Policy-makers and pundits from the member countries of the OECD’s Development Assistance committee (DAC) are perplexed as to what China means for Africa. Should they be worried about the massive flows of Chinese aid and investment into the continent, or is this something to be welcomed? Deborah Bräutigam’s superb book, the fruit of decades of research and travel throughout Africa and China, is precisely the sort of careful treatmentof the subject that they need to guide their deliberations. Indeed, this highly accessible and rigorous book may come to be viewed as a canonical text in the China–Africa development debate."

Stephanie Hanson in Global Post:  June 27, 2010: "As a superb new book by Deborah Brautigam argues, infrastructure projects are opportunities for Chinese construction firms to gain a foothold abroad, and to potentially win future contracts from the private sector or from the international donor community. In "The Dragon’s Gift: The Real Story of China in Africa," Brautigam offers a trenchant analysis of how China views its engagement with Africa, drawing on decades of experience working in West and southern Africa and China. Rather than viewing the continent as a charity case, Brautigam suggests, China sees Africa as a younger version of itself. ...  "The Dragon’s Gift" is a must read. The prevailing narrative about China in Africa says more about Western fears and anxieties about China than it does about the true nature of China’s engagement with Africa.

Solange Guo Chatelard in La Vie Des Idees: July 16, 2010: "...a clear analysis of Chinese aid and state-sponsored economic activities which seek to dispel common misperceptions that pervade existing debates. Through a fast paced and entertaining style which reflects the speed and directedness of unfolding realities in Africa and in China, Brautigam paints an exciting picture of an unprecedented phenomenon, despite what prevailing views claim. The thrust of her argument is both clear and highly relevant and will certainly open the door for new exciting future research on the topic."

International Business Times Palash R. Ghosh's article "The Dragon in Africa: An Overview of China's Presence on the Continent." July 31, 2010. The story says "Brautigam estimates that in 2007, Chinese investment in Africa totaled about $1.4 billion, far smaller than the outlays by the U.S., European Union and World Bank of $7.6 billion, $5.4 billion, and $6.9 billion, respectively, for that year." However, what Brautigam was actually discussing in that section was "official development assistance", not "investment". As she also points out, it's really key to compare "apples with apples" and it's also important to use consistent terms for different kinds of financial flows. Investment by companies is quite different from aid from governments or international institutions.


In learning about China in Africa, Deborah Brautigam is hard to beat. She uses more than thirty years of experience from personal contacts on both the Chinese and African sides to develop great institutional insights into their economic interactions.

From India's Institute of Peace and Conflict Studies, New Delhi, a review by Senior Research Fellow Jabin Jacob, who says: "The book deserves to be widely read for an understanding of ‘rising’ China’s foreign policy – economic and political."

The Weekly Standard November 1, 2010, Vol. 16, No. 07, carries a review of The Dragon's Gift by Human Rights Watch's Asia advocacy director Sophie Richardson: "Anyone writing these days about the Chinese government’s global influence—and especially the role of Chinese foreign aid and investment—must read this book. It is one of the strongest works available about the practices of Chinese aid, decrypting various aid packages to African governments, and raising key questions about whether waves of Chinese aid and investment should really be the cause for concern as they are so often portrayed."

The International Monetary Fund's Finance & Development December 2010, v. 47, n. 4: "Professor Brautigam is supremely qualified to write such a book ... Professor Brautigam repeatedly and convincingly makes the case that Chinese economic involvement in Africa is often misunderstood." The IMF reviewer was frustrated, however, that Professor Brautigam couldn't provide hard data on Chinese aid (which remains a state secret), but had to painstakingly make estimates woven out of bits of information released over time and interviews.


"jargon-free language, extensive sources and endnotes, and objectivity and candor in dissecting the body of the Sino-African relationship. To this end, the objectivity dimension deserves further mention in the sense that Brautigam labors under no illusion that it is all wines and roses when it comes to China’s engagement in Africa."

A South African economist at the World Bank, Brian Levy, reviews The Dragon's Gift in the January 2011 issue ofGovernance:


The book is rich in vivid anecdotes. While written for a general audience, the depth of knowledge and insight that informs it (Brautigam’s work for over three decades has focused on both China and Africa) also makes it indispensable for scholars focused on both China and on African development. A short review cannot do justice to its wealth of revealing detail ... Reading the book leaves me feeling quite optimistic that, in an interdependent world, China’s involvement could turn out to be a valuable asset for African countries—an important contributor to a twenty first-century turnaround across the African continent..

The Dragon's Gift was selected as one of Choice's Outstanding Academic Titles for 2010 (under Economics). Clickhere for the September 2010 review.

Oliver Stuenkel reviews The Dragon's Gift in Post Western World.com, August 15, 2011. I particularly like that he said I am "a great adventurer".

Shanghai TimeOut reports that The Dragon's Gift was the #1 best-selling book at Shanghai's Garden bookstore in November 2010 (this courtesy of Dambisa Moyo).