This guest post, the first of two, is by Dr. Thierry Pairault, research director at France's Centre National de la Recherche Scientifique (CNRS). [1]
The highly active and multifarious presence of Chinese companies in Africa and the unrelenting reiteration of a perfectly crafted narrative, have all contributed to the feeling that former colonial powers and other developed countries have disengaged from Africa. Until recently, the lack of Western investment statistics in African countries to compare with China's own statistics and reports of China’s investment and financing (see my post on CARI blog China in Africa: Much Ado about Investment) had convinced Africans of this abandonment. However, in June 2019, Eurostat (the statistical office of the European Commission) published its most recent Foreign Direct Investment (FDI) statistics, referenced in an earlier paper (Investissements en Afrique : La Chine et les « partenaires traditionnels »). On 20 March 2020, Eurostat updated these statistics on European direct investment abroad. In this note I will briefly compare these statistics with those produced by MOFCOM and the Chinese State Bureau of Statistics.
According to Eurostat, in 2018, if I eliminate the Netherlands (internationally known as a tax haven, hence whose FDI is not properly Dutch), France continues to have the largest stock of FDI in Africa (€46 billion). This primacy could very soon be breached by China, which ranks second with a stock lower by only 5 billion euros (€41 billion). The USA are still in third place (extrapolated from 2017 figures because 2018 statistics are still unavailable) ahead of the United Kingdom (€2 million less than China), Italy (€15 million less than China), Germany (€29 million less than China). Luxembourg and Cyprus operate systems similar to the Netherlands, albeit to a lesser degree.
China's expansion is, indeed, very striking, as shown in Table 1. However, it cannot be concluded that traditional partners no longer invest in Africa because Western investors, in order to maintain a given level of investment stock, must at the very least reinvest some of their profits, but also replenish obsolete capital. Indeed, what we are witnessing is NOT that traditional partners have abandoned Africa, but that Africa has gained a new and powerful partner - China. 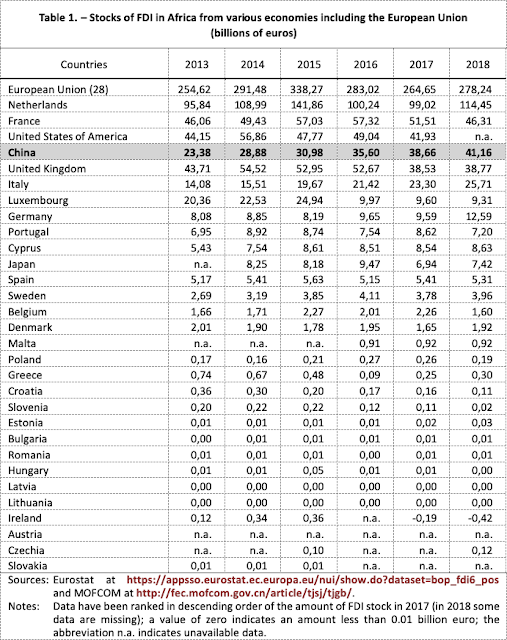 To go further in the analysis, I undertook a suite of principal component analyses to better understand the structure of the data and to better appreciate the proximity [correlation or lack thereof] between observations. These analyses reported in the above-mentioned paper showed that China's behaviour was just as “capitalist” and “mercantile” as that of Western countries, especially European ones. However, the traditional partners do not favour all the African countries receiving their FDI in the same way... I selected 25 African countries that either had in 2017 FDI stock of at least 1% of the European investment stock or that held a stock of at least 1% of Chinese investment. The year 2017 has been selected here and not the year 2018 for which many statistics are still missing.
These 25 countries benefitted from a total of 96% of the European stock of FDI in Africa and 89% of the Chinese stock.  In other words, European investment was targeted at a smaller number of African countries as compared to Chinese investment. If I assume European investment to be purely economic, the question arises as to whether the greater dispersal of Chinese investment might also be expressing more political (for instance, building a client network for support within UN agencies) than economic objectives. As far as Western countries are concerned, I selected only those with an investment stock in Africa of more than ten billion euros (Germany, the United States, France, Italy and the United Kingdom) for comparison with China. The results are shown in Table 2, Map 1. 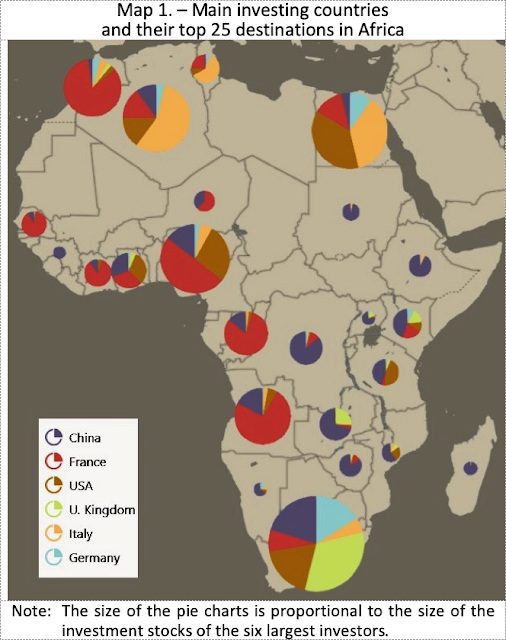 In 2017, three countries climb to the top of the investor countries’ list with the most first, second and third places: China (with twenty places) followed by France (with nineteen places) and the United States (with fourteen places). China's advance is even clearer if I only take into account the number of recipient countries where it tops the list of investor countries (eleven), while France tops the list with eight and the United States with three. This growing Chinese preeminence is politically very important from an African political point of view; however, France and the United States remain the most important investors from an economic point of view.
It should be noted, however, that a high ranking does not always mean more investment. For example, China is the leading investor in Namibia, but its investment stock there is very small – only a quarter of its investment stock in Algeria. In Algeria, however, China only ranks fourth. It should also be noted that China has taken over the position of a “traditional partner” which today is relegated to second or even third place (e.g., France, Italy, and the United Kingdom).
Special mention should be made of Algeria, which has distanced itself from France (third-largest FDI stock) without being economically lured by China (fourth-largest stock); instead it has opened its doors to both the United States (second-largest stock) and Italy (first-largest stock) which hold a large share of the exploitation and distribution of its oil and gas resources. China's breakthrough is also still very limited in Egypt, Morocco and Tunisia. In fact, North Africa does not appear to be a privileged land for investments by Chinese companies – even in the case of Egypt, which is nevertheless endowed with a "Chinese" special economic zone, the only one in Africa that is reputed to function to the satisfaction of the parties [2].
A final point:  one must avoid any absolutist interpretation of both the Eurostat data and the findings they suggest. Generally speaking, available FDI statistics are not yet very reliable; they capture financial flows that may underestimate actual investment. Furthermore, if one has doubts about the quality and comprehensiveness of Eurostat's FDI statistics and those of UN Comtrade, similar doubts about the quality of those produced in China should also be entertained. For the former, the role of tax havens, as in the case of the Netherlands clearly skews their FDI figures. In the case of China, statistics do not tell us the amount of investment that goes through offshore financial centres (starting with Hong Kong) possibly en route to Africa.
Click here to continue reading
Posted by SAIS CARI Team at 6:15 PM No comments:

Did Benn Steil Get it Wrong About China's Intentions for BRI Debt Relief?

On April 15, 2020, the G-20 announced a response to Covid-19's economic distress:  an unprecedented agreement to suspend official bilateral debt service payments for the world's low income countries for the remainder of 2020. The G-20 finance ministers are meeting again and there's one question everyone will be wondering:

Does China intend to live up to its Covid-19 pledge on debt relief?

One of the most influential stories about Chinese debt relief intentions was an April 24 piece on Foreign Affairs' website, "Chinese Debt Could Cause Emerging Markets to Implode," by prominent Council on Foreign Relations economists Benn Steil and Benjamin Della Rocca.

Steil and Della Rocca argued that China had “added caveats that make a mockery” of its G-20 debt relief commitment.  Beijing planned to exclude hundreds of large Belt and Road Initiative (BRI) loans in low income countries, they charged.

Their source for their analysis was an op-ed in the English language Global Times, widely seen as a source of official views. The op-ed was by Song Wei.

Song, who works at a Chinese think-tank under the Ministry of Commerce, was a Fulbright Fellow a few years ago at Columbia University. She writes frequently on Chinese foreign aid and on African issues.

Her piece on Africa's debt problems was clearly written before the G-20 announcement and did not reference it.  She made the unremarkable point that only China's interest-free loans were eligible for debt write-offs. But then she added that “preferential loans are not applicable for debt relief.”

This was confusing. And I can understand why Steil and Della Rocca misunderstood Song's statement.

So let us (belatedly) help them out.

In April, our team (myself, Kevin Acker, and Yufan Huang) was deeply immersed in the final stages of researching and writing our latest Johns Hopkins University SAIS-CARI working paper:  "Debt Relief with Chinese Characteristics"(June 2020). We had collected and analyzed dozens of examples of debt relief, including China Eximbank's (the sole source of preferential loans in China) restructuring of a number of concessional and preferential loans between 2000 and 2018.

Steil and Della Rocca wouldn't have known -- as we did by then -- that the Chinese term “债务减免” (debt reduction and cancellation) is often mistranslated into English as “debt relief”.

So when we saw the same piece in Global Times, we read the statement "preferential loans are not available for debt relief" differently. Song Wei was simply stating something most China-Africa watchers already knew: Africans should not expect debt write downs or cancellation of anything but interest-free loans, consistent with China's debt cancellation actions in Africa over the past 20 years. Other loans would not be cancelled.

Notwithstanding this confusion, Song's article had plenty of other information that clarified her point.

Most importantly, she described how rescheduling and payment delays (i.e. debt service suspensions like the G-20 pledge) were among the many non-write off measures available for China Eximbank’s preferential loans:


"If any debtors encounter difficulties to pay on time, there may be tailored plans including rescheduling [emphasis added]… adding grants to help bring projects back to life, conducting debt-equity swaps, or hiring Chinese firms to assist operations. . . adopting such measures to help the projects get back on track and gain profit has advantages over simply offering write-offs which may only solve issues on the surface and are unsustainable."


So clearly, although we still do not have much detail on what has happened in the first month of the DSSI, Song Wei's op-ed is not evidence of a Chinese plan to renege on its G-20 commitments.

Unfortunately, Steil and Della Rocca's piece was cited as the source for other articles, for example "China Squeezes Debt Repayments From Virus-Hit Nations" (Asia Times, May 5). But what's sad--and more important--is the way this piece has become part of the conventional wisdom.

Just two days ago David Leonardt, a NYT columnist I follow and respect, wrote that China has "tried to squeeze low income countries for debt payments during the pandemic."

No evidence or links provided, but look closer: Leonardt's charge is simply a clear restatement of the Asia Times headline, which is based on Steil and Della Rocca's piece, which, I hope I've shown, was in error.

If China was simply more transparent none of this would be necessary. But until then, we'll keep trying to tell "the real story".


Posted by Deborah Brautigam at 5:31 PM No comments: