South South Cooperation at the UN

On Thursday and Friday last week I attended the UN's Development Cooperation Forum, a biennial meeting held by the Economic and Social Council (ECOSOC) and focused on foreign aid and development cooperation. This year emphasized development cooperation partners from the South. A very interesting tension is developing at the institutional level. The rules for foreign aid and development cooperation have largely been set by the north (ever since the early demise of plans for the SUNFED in the 1950s). The OECD's Development Assistance Committee is the main locus of this rule-setting. The rise of China, India, and others -- few of whom are OECD members -- has some countries talking about the UNDCF taking on more of a rule-negotiation role. Like the WTO, which sets rules for trade, the UNDCF is a forum with more potential to be global than an organization within the OECD. To see my short introductory comments and other presentations at the UNDCF, click here.
Posted by Deborah Brautigam at 12:44 PM 1 comment: 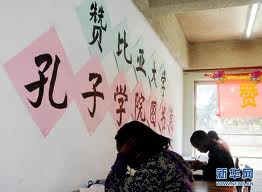 A growing number of students are producing really first rate field research on China in Africa. I recently read the M.A. thesis of Arwen Hoogenbosch, who is finishing his M.A. in Leiden. His thesis, "Made-in-China”: Chinese as a commodity and a socioeconomic resource in Chinese language schools in Zambia" makes fascinating reading.

It's vividly written and full of interesting findings. For example, the story of "William":

... For most of his life, William and his siblings grew up on a Chinese operated farm. The Chinese farmer invested in the children and paid their tuition. The farmer also sent William to the Confucius Institute to learn Chinese. The Chinese employer can be seen as the family’s patron, which improved the cultural capital of the children. The Chinese employer also advised William to work at a Chinese restaurant to improve his Chinese. William’s social capital translated into cultural capital, by living with the Chinese farmer. 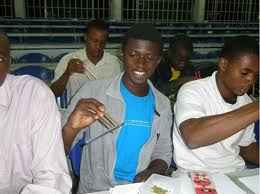 This kind of relationship is not what one would expect from watching "When China Met Africa" (which features a rather less sensitive farmer) and it reinforces a point we can't make too often: there is not one "China" in "Africa".

Then there is "Raymond":


In his work as a policeman he noticed that Chinese people in Zambia were increasingly coming into contact with law enforcement: “Often when they come to the office they cannot defend themselves because they do not speak English, but they have the right to hear what they have done wrong in a language they understand”. When he proposed to learn Chinese, his boss agreed and told him he could do a course in Chinese language during office hours.

Listening this deeply, and sharing these stories online, makes this a valuable piece of work. Thanks, Arwen.

Arwen's analysis of the motives for Zambians to study Chinese is thoughtful. Some thought it would advance their job prospects, although Arwen writes: "it appears that Chinese companies prefer Chinese skilled employees." I think there is a lot more potential for Africans who speak Chinese than perhaps Arwen does. I'm current in Ethiopia and seeing some fascinating examples of Chinese companies employing Ethiopians at a high management level. One firm's production manager is Ethiopian -- he runs the place (the Chinese owner also has factories in Somalia, Sudan, Mali, and several other African countries). More on that in a later blog post.
Posted by Deborah Brautigam at 11:51 AM 2 comments: