The article states that Chinese companies are now a major presence at arms shows in Africa, and Chinese arms have been found in multiple war zones, although "there is no proof that China or its arms exporters have intentionally violated U.N. embargoes in any of these countries. But China has stood apart from other major arms exporters, including Russia, for its assertive challenge to U.N. authority, routinely refusing to co-operate with U.N. arms experts and flexing its diplomatic muscle to protect its allies and curtail investigations that may shed light on its own secretive arms industry."

As David Albright, president of the Institute for Science and International Security, said, "This is really a case of unbridled capitalism and I think the Chinese government is not even always aware of what these companies are doing." Somali pirates have been caught with Chinese made RPGs. Ammunition apparently made in China has been found in Sudan. Chinese diplomats have been "extremely sensitive" about arms investigations in conflict zones. US officials noted that "China was needlessly drawing attention to itself even though other countries such as Russia, Belarus and Ukraine were supplying Sudan with deadlier and more advanced weapons, including attack helicopters."

The data on Chinese small arms exports from the UN Comtrade is very clear. As in other areas, Chinese exports are booming. China's "going global" policy of increasing exports and taking over markets from other exporters is the force pushing this, although they still have a long way to go.Overall, the United States continues to be the world's top exporter of arms. According to the Congressional Research Service, US arms exports tripled in 2011, a total of $66.8 billion. Russia was second, with a paltry $4.8 billion. The US accounted for 78 percent of global arms sales.

For interesting background, see a thesis by Meredith Blank at the University of Michigan that includes case studies of Chinese arms exports to Niger and Iraq. Blank argues that revenues from arms sales do not explain the pattern of sales she identified. However, she compares these revenues to China's total military expenditure. In China's decentralized/privatized world, this is probably not the right way to see them. As we saw in the notorious Libya case, it appears that Chinese companies with their own balance sheets are "going global" and making arms export decisions and deals. While these exports would certainly have to be approved somewhere up the chain of command, the profits can stay with the company. This is incentive enough.

Beijing generally respects the UN. As research by Harvard professor Alastair Ian Johnston shows in his book Social States, Chinese diplomats were socialized into embracing arms control positions after joining regional and global arms control institutions. Its position on the Security Council gives it an extraordinary power for a developing country. Beijing needs to step up and do the right thing on UN investigations into arms transfers in conflict zones.

Chinese migration expert Yoon Jung Park was interviewed by Radio Australia on her fieldwork surveying attitudes toward Chinese immigrants in southern Africa (South Africa, Namibia, Lesotho, and Zimbabwe). She also draws on colleagues' research in Zambia and Botswana. Park finds that while media coverage highlights problems and tensions, the actual attitudes of Africans varies across countries. In South Africa, consumers appreciate the greater range of goods available from Chinese traders. Her research in Zimbabwe also reflected this, and consumers emphasized that during the time of hyperinflation, Chinese shops were able to source affordable goods when others couldn't.

To read more, click here.
Posted by Deborah Brautigam at 9:19 AM 3 comments:

The proliferation of Chinese traders in African markets is one of the perinneal sore spots in China-Africa relations. This video highlights the recent protests in Nairobi where African traders fear and resent the competition. Consumers generally welcome the expansion of products at lower cost, but frequently complain about the low quality of cheap goods.

On the plus side: cheap Chinese cell phone have allowed Africans at the bottom of the pyramid to communicate in unexpectedly large numbers. On the negative side, counterfeit pharmaceuticals -- a regular phenomenon -- can exacerbate illness or fail to prevent death. This creates a climate of fear and distrust affecting all Chinese pharmaceutical exports. None of these products need to be sold by Chinese, of course. As I've noted in this blog, thousands of African traders visit Chinese cities and export directly from China to their home markets.

While some traders believe that their governments are required to accept Chinese immigrants or traders as a quid pro quo for aid, I have never seen any seen any evidence of an agreement to this effect. Some governments do allow Chinese construction companies to import a proportion of Chinese workers for a project. Some works may stay on as traders. Ultimately, decisions about local competition rest with African governments. In Ethiopia, for example, there are no Chinese retailers on the street.


A hat tip to Solange Chatelard.
Posted by Deborah Brautigam at 1:40 PM 6 comments:

Chinese Roads in the DRC: Status?

A Danish reader, Jan Jensen, wrote with a question about the status of the Chinese infrastructure package in the DRC. A lot was pledged in the contract originally signed five years ago. This contract was substantially revised in the wake of pressure from the IMF and the West, concerned about the DRC's sovereign guarantees. I don't think the mine has yet begun to produce copper, but I haven't been following this project (and am too swamped with my job and house transitions to look into it now!). Jensen wrote that he had seen a BBC article several years ago about Chinese tarmacking of the 100 km road from the Zambian border to Lumumbashi, but hadn't seen much since then. Has anyone been following this?

Posted by Deborah Brautigam at 7:53 AM 3 comments: 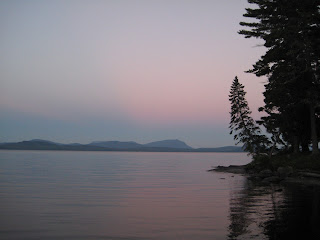 I have been offline for much of the past 20 days, first on vacation in the Vancouver area, Olympic Peninsula and the San Juan islands, then at our family "compound" in northern Maine. Heading back to the northern woods today for the rest of the week, after a family wedding in Falmouth. From the FOCAC meetings in Beijing July 19-20 to Hillary Clinton's visit to Africa, there's been a lot happening on the China-Africa front.

I will be posting soon on the Chinese pledge of $20 billion to Africa: what does this mean? I'll also be commenting on Secretary Clinton's comments on "China".

But now, back to the pines, the loons, the cool northern breezes, and a nearly full moon rising over Moosehead Lake.
Posted by Deborah Brautigam at 8:51 AM 2 comments: