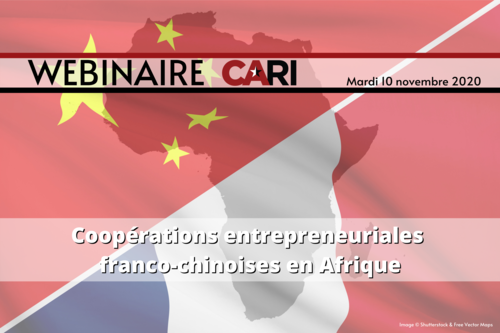 Many aspects of Sino-African relations receive biased or simplistic media coverage. This is especially true of highly nuanced issues, like the dynamics between Chinese and Western business activity in African countries. While most former colonial powers have seen their market shares across Africa decrease as China has grown its economic footprint on the continent, their total volume of trade with African countries has increased. In raw numbers, trade between the European Union and Africa has grown more than China-Africa trade over the past decade. These developments, along with various rumors and misconceptions, are often used to frame the situation as a zero-sum competition between China and the EU. The truth of the matter, however, is far more complex.

On November 10, the China Africa Research Initiative (CARI) hosted a panel discussion on the evolving landscape of French-Chinese business cooperation on the African continent. The event, conducted entirely in French, featured experts on the subject from both academia and the private sector. The panel followed the publication of “French and Chinese Business Cooperation in Africa,” a CARI policy brief written by Professor Thierry Pairault, who was one of the featured speakers at the event.

While media outlets often portray a narrative of direct contention between Western and Chinese businesses in Africa, Prof. Pairault’s fieldwork shows that French and Chinese contractors often cooperate on projects. Historically, these partnerships arose in an accidental or informal manner, but in the past few years firms have started proactively seeking out concrete partnerships. Chinese companies in Africa have naturally begun to partner with other foreign contractors as they have diversified their holdings. The French firm CGA CGM and China Merchants Port, for example, co-manage a number of African ports. Increasingly complex economic ties, both formal and informal, continue to mitigate conflict between French and Chinese companies. The Chinese government has sought a more active role in encouraging business cooperation, but French businesses and government officials prefer informal cooperation.

Jérémy Rubel explored the BRT (Bus Rapid Transit) project in Dakar, Senegal as a case study of collaboration between Chinese firms, European firms, African government entities, and multilateral organizations. The BRT is organized as a public-private partnership (PPP) between the World Bank, the private sector, and the Dakar government. In 2019, the World Bank awarded the contract for the infrastructure and systems portion of the project to Chinese firm CRBC (China Road and Bridge Corporation), which went on to subcontract systems work to the French company FARECO and the Chinese Jiangsu Huimin Traffic Facility Co. Ltd. Other European contractors are currently competing for the private sector operations portion of the PPP. The electric buses for the BRT will likely be sourced from a Chinese firm. Rubel made the case that as a whole, the Chinese framework is increasingly attractive for African public transit projects because it comes with Chinese systems technology, which is less normative but highly innovative, and the services of ambitious Chinese government-backed firms, which are willing to maintain a long-term presence in the client country to operate the project.

Amadou Sy closed the presentation portion of the panel by using his decade-long career working with Chinese firms in Africa as a starting point to discuss the evolution of the landscape. In his role at Egis International, Sy worked with Chinese contractors in the Congo to pioneer a rigorous new program that sent bilingual, highly-trained Chinese engineers to Beijing, Paris, and the Congo. The program led to a partnership between Egis and Chinese firms for the development and provision of services, which allowed Egis to work directly for Chinese contractors rather than for African governments. He noted that in 2014-2015, more Chinese companies began to arrive in the region, signaling a shift towards more intense competition. Sy now helps launch large and technically complicated invitations to tender in Africa, a role that has led him to conclude that the still-widespread belief that Chinese companies are less competitive is mistaken. Several large and technically complicated contracts have recently gone to Chinese firms thanks to recent cutting-edge advances in Chinese technology.

One key takeaway from the Q&A session following the presentations: unlike the Chinese, French companies and government agencies have not defined a cohesive narrative in which to frame French business activities in Africa. This reduces the visibility of French involvement relative to their Chinese partners. The speakers weighed in on several other topics during the Q&A, including the increased hiring of local workers for Chinese projects in Africa. Because Chinese firms now compete on more equal footing with other international contractors, wage levels determine the composition of their workforce. Recent salary increases in China mean that African labor is usually less expensive. Mr. Sy also noted that technology transfers from Chinese firms to African countries have become more substantial in recent years due to an influx of Chinese contractors, more aggressive competition, and greater African demand for technology. Finally, the panel explored the channels of influence available to French and Chinese actors abroad. French embassies are mostly political entities that operate separately from the AFD (French Development Agency), while Chinese embassies can be both political and economic tools due to the presence of a Ministry of Commerce-affiliated minister counselor in addition to an ambassador.

The video recording of the event (in French only) can be found below, and a longer English-language summary of the event is available upon request.