This post, co-written by CARI's Director, Prof. Deborah BRAUTIGAM, and CARI's Research Manager, Kevin ACKER, was originally published on April 1, 2020. It was revised and updated on May 14, 2020 on the basis of a conversation with Horn, Reinhart, and Trebesch (HRT), and a “response to critics” HRT have published on the Center for Global Development blog.


In a March 30, 2020 article, "Hidden Chinese Lending Puts Emerging-Market Economies at Risk,” the Wall Street Journal revived debate about Chinese overseas lending, referring to a June 2019 working paper authored by Sebastian Horn, Carmen Reinhart, and Christoph Trebesch (HRT), "China's Overseas Lending." This paper, an impressive effort to assemble and analyze a wide range of information on Chinese capital flows, has become well-known for its argument that “half of China’s overseas loans to the developing world are ‘hidden’.”

The HRT paper raised important issues about China’s lack of transparency in their global lending. We appreciate their contributions to these ongoing debates, which have only become more salient as the developing world enters a new, COVID-19-fueled debt crisis.

However, we take issue with the "hidden lending" analysis done by HRT, specifically for Africa. The authors’ argument that half of China’s overseas loans are “hidden” rests primarily on a comparison of their estimates of Chinese loan commitment data between 2000 and 2017 to the Debtor Reporting System (DRS)’s confidential and unpublished Chinese loan commitment data for the same period, held by the World Bank. The paper cites the China Africa Research Initiative – SAIS-CARI – as one of the many sources for its estimates of China's overseas loan commitments.

A number of African countries do have worrying debt concerns, and China is a substantial lender on the continent. However, HRT appear to have overestimated lending to some countries while underestimating lending to others. Our annual estimates for signed Chinese loan commitments to African governments and their state-owned enterprises are available on our website. The researchers have not released their own data on Chinese loan commitments, although their data set of debt stocks can be found here. These debt stocks were computed by the authors based on their commitment data, using assumptions about loan terms – interest rates, grace periods, and maturities.

In the original version of this post, we based our analysis on Figure A3 in their Appendix (reproduced below from the original paper), which they described as providing a list of their "30 top recipients of Chinese loans as of 2017”. This figure, ordered by percent of debtor GDP, included 14 African countries.

We pointed out in our original post that this graph was clearly not based on SAIS-CARI’s Africa data. When we compiled our own list of the top recipients of Chinese loan commitments for African countries during this same period, we saw a number of sharp discrepancies.

After the original version of this blog post was posted, we engaged in a productive conversation with the Kiel papers’ authors. They informed us that they had made a mistake in the note for Figure A3. The figure does not show the 30 top recipients of Chinese loans as of 2017. Rather, it shows the 30 countries with the highest Chinese debt to GDP ratios. They noted that they have now revised this language in a new draft of their paper.

Even once this misunderstanding was clarified, it remains clear from Figure A1 below, included in their CGD blog response, that in some cases their data on commitments still differs significantly from ours. The HRT researchers have published their estimates of borrowers’ Chinese debt stocks on their personal websites. However, as of May 12, they have not published their estimates of Chinese loan commitment data. Therefore, it is difficult for us to pinpoint precisely where or why these calculations diverge. Furthermore, HRT note that their data includes loan commitments to private borrowers. CARI data is limited to loan commitments to African governments and their state-owned enterprises, which is roughly equivalent to “public and publicly guaranteed” (PPG) borrowing, and specifically does not include private borrowers. This further clouds the comparison.

Although HRT assembled this graph to argue that their data is similar to ours, this new graph underscores our point. We believe that some numbers that lie behind the Kiel paper’s analysis are being overestimated, and others underestimated. Some of these differences are clearly significant. Importantly, our differences include most of the countries with the largest loan commitments, highlighted in the two red boxes which we have added above.

Loan commitments do not become debts all at once, and some are never disbursed at all. Disbursements of Chinese loans can be particularly slow. Misunderstandings of the difference between loan commitments and disbursements still remain quite common, even among financial reporters covering China-Africa issues. For example, the Wall Street Journal story relied on HRT’s research to highlight Nigeria as a case of “hidden lending.” The reporters suggested that Nigerian government statistics – which state that Nigeria’s outstanding external debt to China was about $1.9 billion by the end of 2017 – are in error. “In reality,” the Wall Street Journal article said, “the total debts Nigeria owed to China were more than double that amount, according to the research.”

We believe this assessment is wrong. Our data, which tracks officially-signed loan commitments, does estimate that Nigeria signed about $5 billion worth of loans with Chinese financiers between 2000 and 2017. (Appendix 1 elaborates). However, there is no “hidden” lending here. The difference between loan commitments and the amount of external debt owed to China is accounted for entirely by two factors: (1) the amount of debt Nigeria has already repaid, and (2) the lag between loan signing and disbursement (i.e. the moment when the committed loan actually becomes a debt on Nigeria’s books).

We appreciate that HRT have (as they note in their “response to critics”) now downwardly adjusted their estimate of Nigerian debt to China by US$ 2.6 billion. However, we believe that this example may only be the start of some necessary adjustments to their debt data.

In February 2020 researchers at the IMF voiced veiled criticism of the Horn, Reinhart and Trebesch estimates. We agree with the IMF. The Horn, Reinhart and Trebesch estimates of the debt that African governments owe to China are calculated from their unpublished loan commitment data. From what we can see in their new Table A1, we believe that they have overestimated some of the African “debt” to China (the IMF’s main concern regarding low-income borrowers) and underestimated it in other cases.

Furthermore, because the World Bank’s Debtor Reporting System data used by HRT are not publicly available, we are not able to independently verify discrepancies between DRS data and our own estimates of aggregate commitment amounts. Since this is the core of HRT’s argument that 50 percent of Chinese loans are "hidden", this remains a very important missing puzzle piece. Without access to both sets of “hidden” data on loan commitments, however, it is impossible to know which way these apparent mistakes tip the scales.

Thanks to Nigeria’s highly transparent Debt Management Office (DMO), we can track repayments and disbursements annually for each loan Nigeria has signed with China. Tracking repayment is easy: the DMO lists the amount of debt service paid on each loan in each year, separated into principal and interest payments. To calculate disbursement (as these amounts are not usually made public), we take advantage of SAIS-CARI’s data on interest rates. Using the interest rate, we can calculate the amount outstanding on each individual loan from the interest payment made on that outstanding balance the following year. We then compare the year of loan commitment from SAIS-CARI data with the schedule of repayment as published by the DMO.

The data show that it can take up to 7 years from the year of loan signing for loans to be fully disbursed. Some projects move even more slowly, with disbursements beginning years after loan signing. This means that a loan signed in 2020 may not be fully disbursed until 2027 (at which point the commitment becomes the same as the debt).

Take the Chinese loan for the 78 km Abuja Light Rail Project, signed in 2012 for USD 500 million. Based on the interest payment of USD 2.7 million in 2013 and the interest rate of 2.5%, only USD 109 million was disbursed in the first year. Therefore, to count the full amount of the loan in 2012 would be to overestimate Nigeria’s debt to China by USD 391 million.

The loan for the hydroelectric project in Zungeru is another good example. Originally signed in 2013 for USD 984 million, the project was repeatedly delayed, and Nigeria did not start servicing this loan until 2017. In 2018, only USD 4.2 million was paid in interest on this loan, suggesting that by 2017 only USD 168 million had been disbursed.

As shown in table 2 below, many of the loan commitments China made to Nigeria from 2000-2017 were not fully disbursed by 2017, in addition to the loans mentioned above. Based on our calculations, the outstanding balance of Nigeria’s debt stock to China was USD 1.94 billion, which almost perfectly matches Nigeria’s self-reported figure of USD 1.93 billion. The discrepancy with the total loan commitments of USD 5.3 billion is accounted for by the USD 580 million that had already been repaid, and the USD 2.8 billion that had yet to be disbursed. “Hidden lending” is not a problem in Nigeria, and we wonder how much of a problem it actually is in other countries. 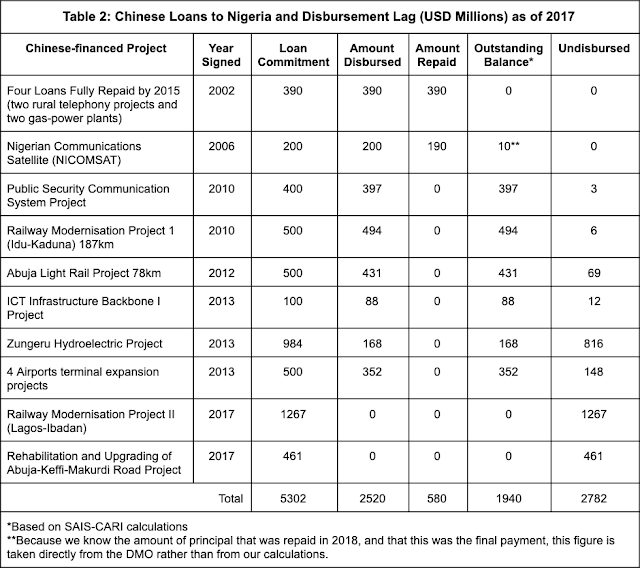