This post is a joint product of the SAIS-CARI team

On June 4, 2018, People's Daily published an article titled "Chinese investment boosts Africa’s sustainable development: Expert". We at CARI are glad to see our data utilized and shared with a broader audience. However, we would like to provide three corrections to this article.

People's Daily wrote:  "Statistics by the World Bank show that Africa’s external debt has reached $ 6.01 trillion by 2016. The debt from China was estimated to total $114.4 billion between 2000 and 2016, accounting for 1.8 percent of Africa’s total external debt, according to SAIS-CARI."

There are two problems with this statement. First, the tiny percentage reported here and attributed to SAIS-CARI had us scratching our heads. We believe People's Daily made a mistake in the denominator in calculating the percent: Africa's external debt stock is nowhere near US$6 trillion in or even around 2016. According to the World Bank’s International Debt Statistics 2018,* Sub-Saharan African debt was around US$454 billion in 2016 (using the “most recent year available”.)
If the debt of the North African countries is included, this brings the World Bank’s figure to about $600 billion in external debt, not $6 trillion (i.e. it is not "$6000 billion"). Clearly a wrongly placed decimal point.

Second, this affects the analysis of the "debt burden" of Chinese loans. Moving the decimal point to the correct place shows that People's Daily should have written 18%. However, even this estimate is not based on our most recent data.

Our current estimate of all Chinese loans committed to African public sector borrowers between 2000 and 2015 is US$102 billion and our preliminary (still unpublished) estimates for 2000 to 2016 are $US132 billion.

It's important to point out that this is not total debt. Some of these loans would have been repaid by now, and not all of these commitments have been disbursed, so the amount of outstanding debt is quite a bit lower than the SAIS-CARI figure of total commitments.

Still, these figures are quite significant and over half of these loans were signed in just four years (2013 to 2016). We have been warning about this debt build up.

We do not know if the World Bank figures on Africa debt stock include Chinese loans. If they do, and if we assume that the World Bank debt stock figures are all current for 2016, then China would account for a maximum of 22% of African debt stock in 2016. The actual figure will be lower than this, as we do not have data on loan repayments or actual disbursements. The bottom line is no matter how much below 22% the actual figure is, it will be far higher than 1.8%.

Lumpy across time, sector, and countries

We have other bones to pick with the sector data. The People's Daily article states that "In 2015, the top 3 sectors financed by Chinese loans were transportation ($4.6 billion), power ($4.5 billion), and industry ($ 70 million). Mining didn’t receive any Chinese financing."

Here is another decimal point problem: our CARI figure for China's industry-related loans in 2015 is $700 million, not $70 million.

Regarding mining: while it is true that in 2015, CARI recorded no Chinese loans going towards Africa's mining sector, this is not the whole story. Our loan data are "lumpy" across time, which is to say that there may be wide variations between years. 2015 happened to be a year with no mining loans, yet our preliminary data shows that mining (a category that includes petroleum) will be the largest Chinese loan-financed sector in 2016, due to a US$10 billion loan from China Development Bank to Angola's state-owned oil company Sonangol. The graph above shows how the sectoral emphasis of Chinese loans in African has changed over the past 12 years.

We realize the “lumpy” nature of some of our data across years, sectors, and countries may not be readily apparent from our website. Stay tuned for a revamped data section of our website later this summer.

And as always, we welcome readers of our blog to comment. 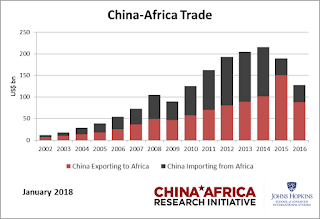 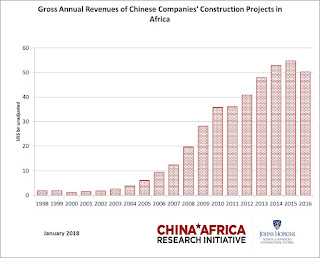 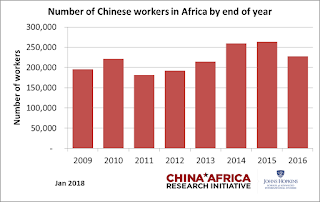 Though falling numbers of Chinese labourers can also be accounted in completion of large projects, or wider trends of labor force localisation, it is clear in the shifting economic relationship between China and African economies, that Chinese firms and economic actors are also feeling the effects of Africa’s economic downturn.
Posted by Deborah Brautigam at 1:24 PM 1 comment: