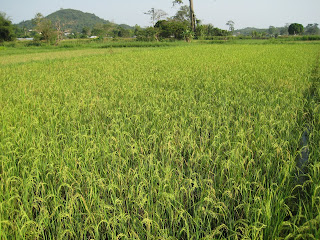 Is "China" actively seeking land in Africa to grow food, presumably to ship back to China? This is the assumption behind much of the reporting and blogging on this topic. Yet as I have pointed out in The Dragon's Gift, as well as a September 2009 article in China Quarterly, there is (as of yet) almost no evidence to back this up.
Yesterday I read Howard French's new Atlantic Monthly article on China and Africa: "The Next Empire". It is beautifully written, with Howard's distinctive voice and insight. Yet in saying that "Beijing had earmarked $5 billion for agricultural projects in Africa in 2008, with a focus on the production of rice and other cash crops" I think Howard included one of the urban myths (if we can call it that) about Chinese rural engagement in Africa that circulate around the internet.
The source of this story is almost certainly a 2008 report by a Liberian journalist on the visit of a delegation from the China-Africa Development Fund to Liberia. The journalist reported that China had "earmarked $5 billion" for the production of food and cash crops in Africa. But this was a big mistake.
Stephen Marks took up the Liberian report in a story he posted for Pambazuka in 2008. Marks pointed out what China-Africa watchers already knew: the $5 billion China Africa Development Fund (CADF) is an equity fund for Chinese investment in Africa, in all sectors, announced at the Beijing Forum for African leaders, in November 2006. Since then, CADF has been sending teams to almost every country in Africa, including Liberia, to scout out developmental investment opportunities in manufacturing, power plants, and so on. Very little of CADF's investment has gone to agriculture.
As Howard's article notes, on June 30, 2008, China's Economic Observer published what has become the centerpiece of most stories on China's overseas farming plans. This June 30, 2008 story on policy discussions in China was intriguing (and looks authentic), but as the original notes, the report is very tentative. There is ample evidence about Chinese interest in investing in agriculture in Latin America (soybeans in Brazil) and in Southeast Asia (mainly oil palm). But in Africa, although Chinese investors have been exploring farming opportunities in several countries since 1990 (and investing in some, such as Zambia), hard evidence for large, new Chinese farming ventures or farmer exports just isn't there.
Instead, what we are seeing a lot of is an innovative model that combines aid and Chinese agribusiness. As in Mozambique (the subject of a forthcoming post), this experiment tasks Chinese companies with finding a profitable, income-generating activity that can allow them to sustain demonstration centers, 20 in total in Africa, showcasing new agricultural technologies and providing technical training. Are these centers the leading edge of a new land grab? I don't think so. They're far more likely to be the leading edge of China's new multinational agribusiness companies. This could be worrying for other reasons (what about GMOs? controversial hybrids?). But that's a separate issue.
Posted by Deborah Brautigam at 1:17 PM

Love the blog. I am a Naval Officer on an Olmsted Scholarship studying International Development at Tsinghua, University in Beijing, China. I plan to travel to Africa this summer for research. II have ordered your book, but it has not arrived yet. I would love to talk to you about my thesis topic.

Would you be willing to help me with this?

Love the blog. I am a Naval Officer on an Olmsted Scholarship studying International Development at Tsinghua, University in Beijing, China. I plan to travel to Africa this summer for research. I would love to talk to you about my thesis topic.

What's your thesis topic on?
I am a student at Fudan University writing my thesis on China-Mozambique.

It's fun to see how much interest there is on Sino-African relations.

20 years ago when I was still an university student in Shanghai, our food was rice bought in canteen. The rice was cook in a big square tin container only around 5cm deep. It than was cut into around 15cm x 15cm pieces and sold to each student.On the top the cooked rice was usually full of what we call "rice bugs". Why? because those rice were call “war storage rice" (zhan bei mi) which were usually stored for the preparation of war. After couple of years of storage (hence the rice bugs), the stored rice were rotated out to the schools and other units.

Major food like rice can be a kind of weapon during a war. China as the biggest population simply can not rely on any other countries on their major food. I think this is a widely accepted concept in Chinese intellectuals. That's why Premier We emphasize many times the importance to protect the arable land. It is indeed a strategic lifeline. With this in mind, it's hard to believe Chinese leadership will outsource food like rice to any other countries. Maybe soybean or meat, which are called "complementary food" (fu shi pin), but definitely not rice.

JD, you can email me directly through American University (www.american.edu). DB

It has been 4 months since this original blog, and recent development has prove how critical the self-sufficient policy for China's food security:

China, the world’s largest wheat producer, has been sitting on the sidelines of the global wheat panic. Today one of China’s most powerful government ministries spoke out on the issue, seeking to allay fears that China would start buying wheat on international markets.

“International grain market prices are all significantly lower than China’s domestic market, so the wheat price spike in international markets will not have an obvious impact on the domestic market,” the National Development and Reform Commission said in a Q&A on its web site.

China is self-sufficient in wheat-growing 115m tonnes of the grain last season-and Beijing considers food self-sufficiency a matter of national security. The country also holds more than one-third of the world’s wheat reserves, with some 63m tonnes of stock according the US department of agriculture.

I just read your blog and your bio. I really like what you've put together here. I think that Chinese investors might be turning Africa the 'right way.' As you stated, perhaps Africa is helping to lead Chinese agro investments. However, I think that it also kills the domestic businesses in Africa. For example, if there is a heavy influx of aid into Africa (maybe mosquito nets) and there is a domestic mosquito net business already, it would wipe them out. How will they ever compete with the free mosquito nets that are sent to them from China? (or elsewhere)

Schumpeter called capitalism a system of "creative destruction" where competition and innovation continually push the old and noncompetitive production aside. Aside from the question of how to compete with free products provided by foreign aid, the role for governments (as China's government clearly sees) is to help position the country's companies to be able to compete globally, not to protect them. Too few governments in Africa have anything like that kind of mind set, and they haven't been helped by the fact that the "Washington Consensus" threw industrial policy out the window.

A key issue, relatively ignored so far, that really deserves more emphasis by all sides is the potentially huge *indirect* effects of Chinese infrastructure projects on African agriculture.

African agriculture, rather than simply being affected by high-publicity land deals (which may affect only a *relatively* small portion of land and people) is closely related to other sectors (health, transport, education, credit, etc). If one considers such inter-sectoral links, there may be actually a quite significant relation between Chinese loans and African agriculture. The relation is complex and indirect, but may be of much much greater significance than the various Chinese land deals and ag research stations here and there.

Such infrastructure may play into increasing local prosperity or differentiation, potentially facilitating land expropriation by domestic or foreign people or companies, depending on the infrastructure and context.

Agreed -- to the extent new roads are opened into virgin rain forest, for example, new farming will likely follow. A study of this would be a good use of research funding.

hi to every ine here; i m maurice from cameroon and i like this blogs an topics; sorry for;my poor english i speak french more;
chinese have understood thjat africa;is the new land to conquire;and what we are living daily here whit them is not to good as eperience; they are very racist and provocative; i will like to colaborate whit to make a document on chinese way of living and investing in africa;
if your interest let me know
mauriceturbo@yahoo.fr