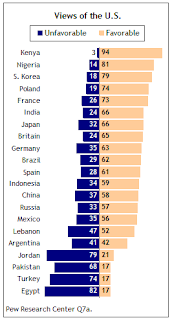 I am a journalist working for the Journalism and Media Studies Centre at The University of Hong Kong (HKU).

I have a few questions I'd like to ask you regarding Africa-China relations. I am new to this topic, however, I am very interested to learn more.

My goal is to draft an article by next weekend on Sino-Africa trade and investment relations.

If you can be a source for my article and give brief comments, that'd be great.

Please get in touch with me at chienmi@hku.hk.

Thanks and hope to hear from you soon.

As you know, we share the same interest in Sino-African relations. I am aware of the Pew reports, but I think there's even a better article which you should recommend to your students who want to have an idea of what African people think of Chinese immigrants and workers on the continent.It's called African Perspectives on China-Africa links and was published in China Quarterly in 2009. The authors are Barry Sautman and Yan Hairong. Enjoy your reading!

Interesting post. You could add to it. Afrobarometer has public opinion info on China for 20 African Countries. You ought to be able to extract it here:
http://www.jdsurvey.net/afro/AnalizeQuestion.jsp

Thanks for the salient article. As a Chinese-American Peace Corps volunteer living in rural Tanzania, this topic is of particular interest to me as it is something I deal with on a daily basis.

However, I wonder who the Pew study surveyed in Kenya: Those living in the cities or in rural villages. (In Tanzania, it seems that only the upper and upper middle classes who live in large cities tend to view China benevolently. The vast majority of people I, and other Asian American volunteers, have encountered view China unfavourably. I suspect this is due to levels of education and access to news, and assume something similar occurs in Kenya. The study further assumes that the study population knows the difference between China and other East Asian countries, which does not map out to the overall African population.) The Pew report is surprisingly upbeat about 'African' public opinion on China, as in Tanzania the majority of people view China in a negative light: The slang for fake or broken electronics is "Chinese", wachina are harassed a lot more than wazungu in major cities, etc. Of course, the study is on Kenya and not Tanzania...

Anyway, thanks again for the great article and fantastic blog!
-Yue

A March 2011 BBC public opinion poll continues to give positive ratings from Africans on China's rise, although South Africa opinion has dropped since 2005 (when it was the only African country polled). See the full report at: http://www.worldpublicopinion.org/pipa/pdf/mar11/BBCChina_Mar11_rpt.pdf

I am rather late to this post, but I thought I would provide a perspective from another Peace Corps volunteer. I am posted in Benin, and China seems to be neutrally or positively received here.

China does a lot of development work here that supports large Chinese industries, but the development part is highly publicized. For example, China just gave money to improve roads in Benin. (Roads that connect a Chinese logging company to the port.) Thus the common reaction to China is positive because they are cast in the roll of a country that provides aid.

As to Chinese people... I conducted a very informal survey showing Beninese people pictures of all of the volunteers. I asked them to tell me who was beautiful, and every single Asian volunteer was chosen, and few others were selected. I think this indicates positive feelings toward Asians in general, and Chinese in particular, because they generally think that every Asian is Chinese. After all, if you have negative feelings about a nationality I think you are less likely to consider them beautiful.

Beninese people generally enjoy martial arts movies and get excited when they see an Asian volunteer. They ask if the person is Jackie Chan, or the wife of Jackie Chan, and generally make racist comments, but always out of excitement at seeing someone they perceive as coming from China.

I think the volunteer from Tanzania's experience is very different than what I have seen, so it is possible that hir questions of the survey are accurate, or, as s/he mentioned, that Kenya is that different than Tanzania in its reception of the Chinese.

The truthness is that we Africans will perceive as good Chinese investments as long as they don't seem racially biased.

That Jackie Chan part made me laugh, I was mistaken for Willy Smith son in Europe or as famous footballers son. That stuff make me laugh because I still don't understand how much stupid a person must be to say such silliness.