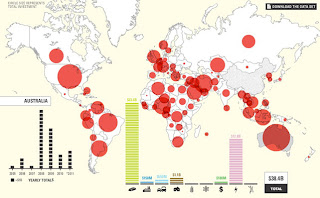 A reader recently sent me a link to a design website that profiled Chinese overseas FDI projects, collected by Derek Scissors at the Heritage Foundation. But the website host, Cliff Kuang, uses Derek's great infographics to makes his own, inexpert analysis that perpetuates some of the Cold War frames commonly used to discuss China's emerging global role: FDI as "checkbook diplomacy."

For example, Kuang writes "... you'll notice that [sic] majority of China's trading partners aren't in Europe or America: They're in Asia and Africa and South America. In other words, precisely those countries which have always spoken last on the world stage. China is using its economic relationships to create an alternative bloc of power, which can directly compete with the political might of the E.U. and America." and "China has neutralized our power to oppose it by holding so much of our debt. And it has simultaneously drawn other countries closer to its bloc of power by offering them a taste of its rocketing economy."

Here, obviously, Kuang is mixing up trade with FDI. The charts he is illustrating have no trade data (and if they did, they would show that China's major trading partners are precisely Europe and America, not Africa and Latin America). So if Kuang had used trade graphs, he would have to make a different kind of argument. And the idea that China has 'neutralized' our power by holding our debt? The fact that our defense budget accounts for 48 percent of total global military spending is, I suppose, of no account ...?! As for China's alternative bloc of power, just what is this supposed to mean? Australia, Chile, and Japan? Hello Cold War II?

On the other hand, I think that Derek Scissors at Heritage is doing a great service by collecting and publishing (and continually refining) this project-level data. However, users of this data need to be careful, because it is not truly comparable with other countries' FDI data published by the OECD or other sources.

Why not? Two major reasons.

First, Derek is only tracking investments of $100 million and higher. This is going to leave out literally thousands of smaller investments that might be going into manufacturing, services, or agriculture. The kind of small and medium sized factories that are the first to start up overseas simply won't be captured by this database, and that creates a distorted sense of the sectors to which Chinese investment is going. In 2010, for example, Chinese overseas FDI in mining was $5.7 billion, and manufacturing $4.7 billion. Most of the latter will be in other developing countries. (For the reason why, see World Bank chief economist Justin Yifu Lin's 2011 WIDER Lecture: "From Flying Geese to Leading Dragons" or my 2008 book chapter on "Flying Geese or 'Hidden Dragon'?")

Second, Derek is collecting and recording FDI commitments, not actual flows. So if a project is expected to cost $3 billion over a number of years, he is putting the entire $3 billion in as "Chinese FDI". However, this is only accurate in a merger or acquisition, when the entire amount is actually being paid up front. And it is not how FDI flows are recorded in the OECD countries -- they record actual flows in the year that they actually happen. Mining and other large-scale investments take place over a number of years. Sometimes they don't take place at all (although Derek is doing a good job of adjusting his database to account for this failed projects, from what I can see).

A hat tip to Lisa Guetzkow.
Posted by Deborah Brautigam at 5:17 AM

Shame about the accuracy of the figures as its a nice looking graphic, hopefully over time the figures will distinguish between trade and FDI. Its an interesting hypothesis that China is building an alternative power bloc - but as mentioned, not really borne out by the trade figures.