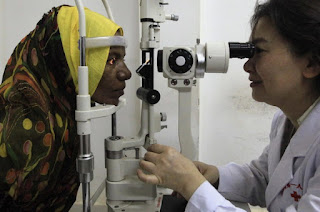 When I wrote my first book on Chinese aid to Africa in 1998, I documented how problems with language and local capacity led to difficulties in technology transfer with material goods -- although skill transfers ("learning by doing") were more successful.

Yin shows how little has changed. Chinese medical teams appear to be popular, but Chinese equipment and medicine donations are still coming with instructions only in Chinese. Training is inadequate (five days!), and, consequently, donated goods and machinery sit gathering dust until they expire -- a huge waste for China and for the recipient. This probably doesn't happen at the few places where Chinese doctors practice in revolving medical teams -- but the malaria centers built by the Chinese in an number of African countries do not have any Chinese staff or assistants.

Changing this would require a number of things to change:
Yin was not able to study a number of the malaria centers, but this is also an area ripe for student (and other) research. I saw how Ethiopia appears to have good plans for its agro-technical demonstration center, while Tanzania was not at all clear how they would use their "Chinese gift." How have the malaria centers fared across the various countries that have received them? What explains the outcomes.
Posted by Deborah Brautigam at 3:41 PM