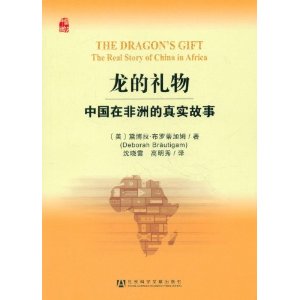 布罗蒂加姆教授,恭喜您！Congratulations on the publication and release of the Chinese edition of The Dragon's Gift. My order is in, can't wait to get my copy. This is a major contribution to the evolving conversation about Chinese foreign aid and investment. I look forward to sharing, recommending and discussing this work with Chinese friends and colleagues engaged with China.

Unfortunately your "Global Time" link is not working.

It leads to a portal at John Hopkins Enterprise Authentication log in page.

I am afraid that you haven't taken into account of the different kind of "foreign aids", in term of what the United States is doing versus the one from China.

The so-called "foreign aids" from the United States of America (and from the Western European nations) consist of mainly commodities - food and medicine.

Or put it in another way - what the Western nations have been giving to Africa for the past 60 years are "fishes".

On the other hand, China doesn't give out "fishes". Instead, China's foreign aids come in the form of road building, railway construction, electricity power generation and power distribution grid - all were/are designed to uplift Africa's infrastructure.

In Economy, there's a thing call the "Multiplier Effects" - http://www.investopedia.com/terms/m/multipliereffect.asp

While it's normally used to describe effect from money supply towards the economy, the "Multiplier Effects" can also be used to measure the effectiveness of foreign aids in places like Africa.

For the past 60-some years or so, the West had been supplying Africa with aids. Tons and tons and tons of foods had been sent to Africa to feed the hungry.

And after the food is consumed, what's next?

So more food is sent, and consumed, and ... you get the drift.

On the other hand, the "Multiplier Effects" from a road, or railway, or power generation project had on a nation is much more than mere food.

It's all intangible - but the cumulative effect of infrastructure projects far surpass that of food aid.

The amount of foreign aid China is giving out may not be much, but if you figure in the "Multiplier Effects", what China did (and is doing) in Africa can have a longer-lasting and much more beneficial effects to the African continent than the food aid from the West.

Sorry about the Global Times link -- not sure what happened there, and I no longer have the original link. If anyone can find it on the www, please let me know.