China and Mauritania: Whatever Happened to the Railway? 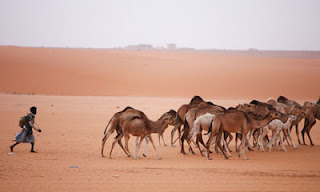 In 2007 and 2008, many of us read in the Western and Chinese media that a Chinese-Sudanese joint venture was going to build a railway to Mauritania's phosphate deposits in the border town of Kaedi, and that China Eximbank had agreed to finance 70 percent of the $686 million project.

This project was listed in the World Bank's 2008 study of Chinese infrastructure projects in Africa, Building Bridges, and has been assumed by many to be ongoing.

I was more skeptical about this project, as there was no further word about it after 2008. I didn't include it in my 2010 book, The Dragon's Gift. But I always wondered what had happened.

Now we know, and the answer is: nothing.

In an April 2012 article, "Phosphate of Bofal: Dream or Reality?", a Mauritanian journalist, Ahmed Yahya Kowri, solves the puzzle. He writes that he'd been hearing about the potential of this "famous" project since he was a schoolboy in the 1970s. The idea that the Chinese would finance a railway was a more recent part of the dream.

Now, Kowri writes, an Indian company is actually mining the phosphate. While Kowri applauds the realization of the long-promised mining venture, he also writes that there are problems: the Indians are bringing in a lot of Indian workers and managers, they are not respecting the environment or the communities, or "law in general," and they are putting a lot of pressure on the government to get exemptions and special facilities. People are made to work 12 to 14 hours a day, and the labor inspector is nowhere to be seen.

What's interesting about this, to China-Africa watchers? A few things.

(1) First, it shows how important it is to be skeptical that an agreement is actually a project. Always follow up on any signed agreement. They come with many different levels of concreteness, varying from a simple MOU (which merely means, "let's continue talking about it"), to "Protocols" to "Contracts" and "Conventions". I am always skeptical until I see work actually beginning (and even then it can still all fall apart, as we have seen many, many times).

(2) Second, we often hear that the Chinese are the "worst" investors in Africa, with regard to the environment, social relations, labor practices. Perhaps a more useful way to see it is that emerging market investors are not going to have the corporate social responsibility ethos or knowledge of those from wealthier industrialized countries. As the complaints concerning the Indian investor suggests, this probably has nothing to do with being a democracy or not, and all to do with being a developing country, with developing country standards.

Hi,Ms,Brautigam, i am a chinese technician, i did a lot of government aiding job in africa, and i been reading your book, dragon's gift, just want you to know that i am such a fan of your work. Best regards

Dear Anonymous,
Thanks so much for your comment. If you ever feel like telling me more about your work, I'm always interested to learn details of people's experiences as aid workers.
Deborah Brautigam

sorry for the delay, professor. Brautigam. i would like to share my story. i am in Mauritania now, it is quite busy these days, how can i get to contact you, i googled your email, is it dbrautigam@jhu.edu?

Yes, that's my email. Looking forward to hearing from you.

Many of the deals that were inked between China and Africa came to fruition.

But not for those which Sudan got involved.

The rumors that I heard - none of them can be confirmed - is that the Chinese government is not that comfortable doing business with Sudan.

Things gone even more complicated when South Sudan got their independence.

I am not that surprised that the railroad did not move forward - it's just not feasible for such a railroad to become reality, not in financial term nor in safety concern.