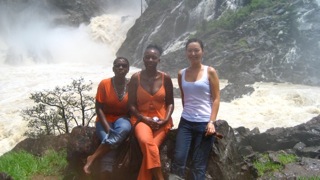 Most of this blog is about the political and economic side of China in Africa. But in many ways, it's the cultural side that fascinates people. Below, a guest blog post from Irene Sun on her "blind date" experience in Namibia: 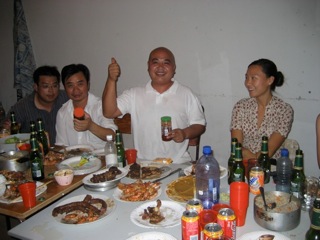 In 2008, I was a teacher in a public secondary school in rural Namibia. For those of you who aren’t familiar with it, Namibia is twice the size of California, but it only has two million people (by contrast, New York City alone has 8 million people). Namibia is sparsely populated, and it took some effort to secure the essentials of life when the nearest grocery store and bank was an hour away by car.

Given these circumstances, I cultivated sources for any foods that weren’t maize or mahangu (the local grain staple). I brought food back when I had reason to go to Windhoek, the capital, and I befriended a couple with a garden in my town. But there was one peculiar network I took particular pleasure in discovering: the Chinese food network. All over Namibia, Chinese entrepreneurs had opened shops selling cheap goods imported from China. I had gone into one of these so-called ‘China shops’ in my area out of curiosity, and after some initial surprise at meeting a Chinese woman from America, the manager of the shop offered to have his workers who regularly deliver goods from Windhoek bring along some Chinese groceries for me as well. I was Chinese food-starved, so this was an amazing lifeline: fresh Chinese vegetables trucked from the capital, 12 hours away by car!

Over the next few months, I picked up my share of groceries every other week. During one visit, the China shop owner told me that he was going to have a celebration in honor of a friend visiting from Windhoek and asked if I wanted to join. Having little else to do on the weekends, I agreed.

On the day of the celebration, I showed up at the appointed China shop to find my shop owner there with his friend. The three of us drank local beer and expensive, rare tea that the friend had brought back from China. Afterwards, we headed to another China shop, where lower-level Chinese workers were busy preparing a feast. They had cleared out one room of the shop and installed two large round folding tables. In the back, young Chinese men labored over chopping boards and woks and sent out a steady stream of dishes that eventually covered the table. It was hands-down the best meal I had in my year in Namibia, and certainly the most impressive. There was every type of meat: beef, goat, chicken, fish, pork, and duck, the latter two of which Namibians don’t commonly eat. There were fresh Chinese vegetables trucked in from Windhoek 12 hours away and baijiu liquor from China. And to this day, I still have no idea how they procured the fresh prawns, as we were in a landlocked part of the country that was a 16-hour drive from the ocean.

Over the course of this feast, it dawned on me that this was essentially a blind date. The night had been prepared for the shop owner to set me up with his friend. He had been careful to seat us next to each other at the round table, and most of the baijiu toasts were crafted to show off his friend’s accomplishments. To be fair, his story was impressive. He had arrived in Namibia at age 17 after having dropped out of high school in China. At that point, he was only barely literate in Chinese and knew no English, Oshiwambo, or Afrikaans at all. His only friend who came with him to Namibia lasted 2 days and then headed back to China. From these humble beginnings, he worked his way up the China shop chain and after a few years, owned several dozen China shops himself. He then sold them and started a security firm providing armed guards to various businesses all over Namibia. This had grown to a firm employing 500 people, and now, wealthy and in his late 20s, he was ready to find a wife. But there were few Chinese women in Namibia, and hence his China shopkeeper friend had thought of me.

I was not interested in a husband, so I attempted to resist their offers for me to stay in town that night. After dinner, I insisted on going back to my small town an hour away, and they insisted that they escort me back. Chinese people are difficult to refuse when they truly insist on something, and these Chinese in Namibia were no exception. So I found myself in the passenger seat of the Chinese wife-seeker’s car, a black BMW. I learned during the ride that this was in fact his fourth black BMW. He had purchased the first one before he knew how to drive. Unsurprisingly, he promptly wrecked it. (In the fight between the BMW and the cow, both lost.) The next two BMWs had followed a similar fate before he mastered the art of driving – a fact that I wished I knew before I had stepped into BMW #4.

They dropped me off at my house, and after that, despite some searching inquiries, I didn’t go on a second date. The whole experience did leave a lingering impression on me though, of the toughness, the grit, and the sheer ingenuity of Chinese entrepreneurs in Africa. In a strange land, they were living large.

So ladies, if you’re Chinese and looking for a husband and an adventure, Namibia just might be a good place to look!
Posted by Deborah Brautigam at 9:38 AM

The Chinese who own shops in Africa came from many different parts of China (and also from the Chinese diaspora from other parts of the world) and the way they communicate with each others is by using the "Pu Tong Hua" - it's their common mean of communication.

Even if you do not look like a Chinese, the fact that you can use "Pu Tong Hua" will earn you a "Chinese" credential in the Chinese circle.

I am speaking from experience.

I am pleased to say that we are now capable of diagnosing diseases and undertaking medical procedures and treatment which before were not possible in-country. With this hospital, we can now provide Dialysis and CT scanning services and many other specialist services that were not offered in-country.
In addition, this hospital will support our efforts to expand medical education in Sierra Leone by providing an ultra modern teaching environment for Sierra Leoneans undertaking medical training at the College of Medicine and Allied Health Sciences (COMAHS).