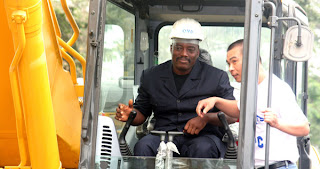 Ph.D. student Johanna Jansson's new briefing, "The Sicomines agreement revisited: prudent Chinese banks and risk-taking Chinese companies," an analysis of the reportedly massive Chinese joint venture in the Congo -- Sicomines -- is right now available in an ungated version in a special issue at the Review of African Political Economy. Johanna is the world's foremost expert on this project, the focus of her Ph.D. dissertation. Her new analysis, based on earlier but also very recent research (December 2012) charts recent ups and downs of this project. To our surprise, after providing about $1 billion in finance for infrastructure, China Eximbank pulled out of the project. This may be a temporary step. Johanna points out that the risk of this project falls squarely on the two Chinese construction firms that are the major parties to the agreement. It's a fascinating story, highly recommended.

A year ago, I interviewed one of the early participants in the negotiations over this project, an expert in project finance and coordination who was then working for the China Railway Engineering Corporation (CREC), one of the major participants in the Sicomines project. His observations add new light to the origins of this project. It appears to go back further than we had thought. In around 2004, he said, the Chinese focus in Africa shifted toward infrastructure for resources packages. He was part of a special team focused on the DRC, Southern Sudan [yes, that's right, they were thinking ahead], and Angola.

"The Sicomines project idea came from the Congolese," he told me. In the 1990s, we [CREC]  approached them, to suggest that we build things for them. But they had no money. They said:  'we have a lot of copper." They also didn't want only Western miners in the country. They wanted to kick start the old mine, but this needs investment and infrastructure. So they needed something to secure the package." CREC invited Sinohydro. This was based on the project's needs, but also on who was already active in the DRC. Other Chinese companies can be competitors or cooperate. If we didn't bring them in, they might have competed with us."

"The negotiations started in late 2003. The breakthrough was in 2006. There was a temporary lull because of the civil war, also the copper price was lower until 2005. As the asset value went up, the amount of infrastructure it could finance went up. Angola was also good timing with oil prices."

Doing these packages is "complicated," he said. "You have to involve Sinosure, MOFCOM, the Ministry of Finance. It's like running, running in circles. That's on the Chinese side. On the African side, it's the same thing. Back and forth. My job was to make sure each side understood how the other worked. You have to present a bankable feasibility study to the banks."

"Why do this complicated kind of project?" I asked.  He said: "You can generate the revenue to pay for the construction; this creates business for us in the DRC. It also helps with diversification of our company. To have mining assets makes us more attractive. And you are leveraging policy bank money. The policy banks have to use their funds. For them, short term trade finance is less important because Chinese commercial banks, Hong Kong banks will do that."

What about the terms of the finance? "Some of the DRC projects carried out by CREC and Sinohydro can be financed by concessional loans (you hui dai kuan) but these are not part of the package, they are not repaid from the mining project. Loans at LIBOR plus a margin have become very popular over the last five years. They can be bigger, they do not qualify for interest rate subsidies. The profit margin is low for the bank, but there is still a little spread [over their costs]. It has bigger potential."

"The mining loan was to be provided by CDB," he said. (This is also something I had heard from another Chinese analyst but I haven't seen this elsewhere and can't confirm it.). He thought that some of the other finance was coming from supplier credits to the companies involved.

One final point of interest: guanxi. CREC had a very useful person on their staff, someone they had hired from MCC (the China Metallurgical Corporation). This guy's father had a relationship with Joseph Kabila, the president of the DRC, from when he studied in China at the People's Liberation Army National Defense University in Beijing. This guy had also worked in Zambia. "He understood the technical, the economic, and the African perspective. This is rare."

photocredit:  China Africa Project.
Posted by Deborah Brautigam at 11:17 AM

Thanks very much for this post. It has answered many of my questions and Johanna Jansson's paper was particularly useful.