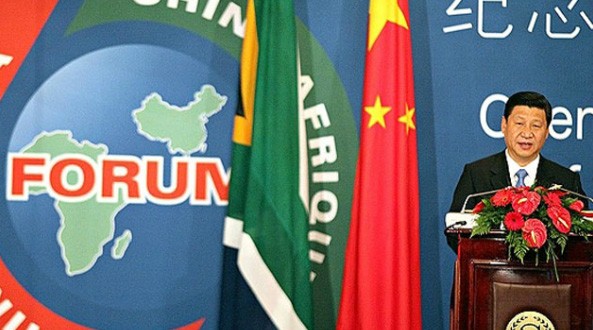 FOCAC 2015: Here in Johannesburg, on a stunning summer day, Chinese president Xi Jinping must be enjoying waves of warm feelings (and the relatively clean African air) following his "pledges" speech at Forum on China Africa Cooperation this morning.

Here are some of my initial* reactions:

China will continue to support capacity building in Africa. The pledges include construction of an unspecified number of regional vocational training centers and "capacity-building colleges" that will offer vocational training and education to 200,000 Africans. The time frame for this FOCAC pledge was not stated but we can expect that this will be rolled out over the next six years: three years to get the construction started, and at least another three years to make them operational and establish programs. Shipping Chinese trainers to Africa has not gone over all that well in the past. Ethiopia had to bring in Germans to replace the Chinese instructors at its Chinese-built vo-tech college. Let's hope that someone in Beijing is thinking strategically about how to build up the African expertise for teaching all these students "how to fish."

China will support the construction of five "Jiao Tong" ("Jiao Tong" means "Communications") universities in Africa. Hmmmm. Will these be like the prestigious Shanghai Jiao Tong University, known for its quality research across a number of disciplines? At first I thought these might be efforts to steer the training of journalists in more China-friendly directions, but it seems that Jiao Tong is better translated as "transportation" -- as a reader pointed out below, in China Jiao Tong universities "are elite schools in training technicians, engineers, and scientists" ... not journalists. This will fit nicely with bringing the "One Belt, One Road" Initiative to Africa, training Africans in the higher technical skills (see my Foreign Policy piece for more on this). Again, no time commitment here. Past FOCAC pledges have been rolled out over more than one FOCAC cycle.

China is continuing to emphasize a more "green" approach to Africa. One of the ten pledges states that "China will support Africa in bolstering its capacity for green, low-carbon and sustainable development and support Africa in launching 100 projects to develop clean energy, protect wildlife, promote environment-friendly agriculture and build smart cities." This follows on from the pledge made at the 2009 FOCAC in Egypt, that proposed "to establish a China-Africa partnership in addressing climate change ... enhance cooperation on satellite weather monitoring, development and utilization of new energy sources, prevention and control of desertification and urban environmental protection. We have decided to build 100 clean energy projects for Africa covering solar power, bio-gas and small hydro-power." As far as I know, no one outside of the Chinese government knows where those clean energy projects are located. I came across one proposal by accident: a Chinese sisal farm I visited in Tanzania was applying to this program to get funding for a biogas project out of its sisal waste.

Funding pledges continue to climb. To fund these and other programs, China will provide $5 billion in grants and zero-interest loans, and $35 billion in a combination of preferential loans and [non-preferential] export credits and concessional foreign aid loans.  He also pledged to add another $5 billion to the China-Africa Development Fund (so it will now be expected to eventually reach $10 billion) and increase the China Development Bank-funded African Development Special SME (small and medium enterprise) Loans by another $5 billion (this was originally set up at $1 billion). Finally, he seemed to pledge to set up a new China-Africa Industrial Cooperation Fund with $10 billion. This emphasis on manufacturing is very welcome and something I expected, given all the discussion about Chinese offshoring lower cost manufacturing to Africa over the past several years.

China will cancel the overdue portion of interest-free loans provided to low income African countries. I expect a lot of reporters are going to get this wrong. I'm already seeing people calling this a broad debt cancellation for all Chinese loans to low-income countries. No, no, no! This refers only to a special category of "zero-interest" foreign aid loans. Since 2000, the Chinese have regularly cancelled overdue zero-interest loans that countries are unable (or simply unwilling) to pay.
The bottom line here is a pledge of $60 billion in various kinds of support (NOT ALL "AID"): $5 billion that is clearly official development assistance, $35 billion that is a mix of export credits (which may be commercial or subsidized) and concessional (subsidized foreign aid loans), and what seems to be an additional $5 billion in a credit line for SME finance. The CAD-Fund finance will be different: it's for equity investment. And although reports suggest that new China-Africa Cooperation Fund will be focused on manufacturing, it's not clear if it will provide grants, loans, or investment -- or merely be drawn on, by the Chinese, to pay for a variety of activities, like the Human Resources Development Fund for Africa established in 2000, which pays for training programs in China.

We can compare this with the specific 2006 pledges of $5 billion in preferential/ concessional loans, and a further $5 billion for the CAD-Fund: from $10 billion in financial commitments to $60 billion over just nine years.

Frankly, I did not expect to see this level of serious loan funding ($35 billion) -- although I don't think Xi Jinping put a specific timeline on any of these pledges, so it could take a while to roll them out. My sense is that a lot of countries are having trouble absorbing the Chinese loans on offer over the past three years. With lower prices for their exports, these loans will be harder to repay. Perhaps Chinese commodity forecasters see rosier numbers starting five years down the line, when the grace periods for the first loans will start to expire?

*revised slightly after seeing English copies of the speech.

Posted by Deborah Brautigam at 6:10 AM

Personally, I agree with you especially on the loan part. I think just within hours I have seen Foreign and Chinese media, institutions, individuals consider "60-billion-USD" as aid, which is far from reality. And on the time frame, I also find that missing. Usually, the pledges are made for three-year period, to be replaced by another round of pledges at the next FOCAC ministerial meeting. But this time, there is no mention of all these committed projects to be implemented in three years. Considering the size of it, it is very likely, as you said, to take longer time. I would consider it a new approach by Xi's administration in terms of advancing FOCAC cooperation: setting long-term goals and being more realistic in the time-frame while trying not to disappoint African countries. But it is also different from 2006 as well. Now, other than FOCAC, Beijing has forum on Arab countries cooperation, forum on Latin American countries cooperation, and lately "One belt, One road" initiative. I am not sure how policy makers balance them all.

From Matt Ferchen @Tsinghua U: Thanks for passing along your analysis here. Your last comments about the unexpected rise in Chinese loan funding commitments and the willingness or ability of African countries to absorb rising Chinese-funded debt is also something very much on the minds of some in Latin America, not to mention SE and Central Asia. From the Chinese perspective, I think changes in the domestic economy (i.e. the slowdown and move away from heavy industrial production) are propelling the search for new loan and investment opportunities and then with the end of the commodity boom in Africa and elsewhere there may be relative bargains for Chinese banks, companies and importers. I've heard some discussions about how the possible commodity-related fire sales in some South American countries could be a huge opportunity for Chinese deal makers, but along side that is the fact that some of those hardest hit by the end of the commodity boom are also some of the biggest risks politically and economically (e.g. Venezuela).

I have posted my reaction to the financial commitments made at the 2015 FOCAC. http://www.chinaafricaproject.com/focac-2015-making-sense-of-the-numbers/

Hi Kai,
I read your reaction and I agree with you -- except I think you are underestimating the amount of official aid in the commitments (I rarely think that someone is underestimating Chinese aid!). This is because some of the concessional/preferential loans in the $35 million pledge will be subsidized by the official aid budget and will qualify as official development assistance. The subsidy is scheduled to increased, since other news suggests that the interest rate is going to be lowered from the standard 2 percent to 1 or 1.5 percent (at least I thought I'd read this but I can't find a link -- anyone else see this news?)

http://www.iol.co.za/business/news/china-s-60bn-is-an-early-christmas-1.1955763
This article mentions the interest rate drop, but without any specifics...