Guest Post: Is China taking control of Zambia's national broadcaster? No, it is not. 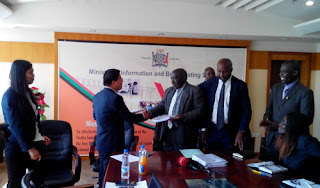 Is China taking control of Zambia's national broadcaster? No, it is not.

On September 19, 2015, Zambia's Ministry of Information and Broadcasting Services (MIBS) signed a contract worth US $ 273 million with China's Star Software Technology, a subsidiary of Star Times, to implement phases 2 and 3 of Zambia's migration to digital terrestrial television after successfully winning a public tender . The story which reported at the time by well-established local news outlets,: such as the Zambia's Daily Mail , and international media: such as Reuters . Now, fast-forward to May 2016 When the story resurfaced on a Zambian blog called Zambia Watchdog , but with a very different spin and at alarming headline: ". Startimes cheats PF, signs contract to take over ZNBC operations"

It does not take one long to notice did Zambia Watchdog is a dubious source of information, with a very strong negative bias towards the ruling party, the Patriotic Front (PF) and, by extension, towards China, Which enjoys cordial relationships with the PF , The blog presents itself as a source of "Breaking and Investigative Journalism on Zambia," but reads more like an infuriated collection of difficult-to-believe stories. Here are two representative posts of how China is framed in the blog: " Chinese assassins hired to kill HH, GBM arrive " (June 14, 2016) and " Another minister in China to admire buildings and thank China " (May 29, 2012) , All the stories in the blog are anonymous.

Despite the obvious bias, the May 2016 post on Zambia Watchdog about the takeover of ZNBC, Zambia's National Broadcasting Corporation by Star Times, which soon picked up Nigeria's Leadership newspaper and Several industry blogs, like the one curated by South African journalist Thinus Ferreira , a regular contributor in South African media on television-related stories. None of the two reached out to Star Times for comment. Three weeks after the original post, today's edition of Kenya's The Star revisits the story once more , using Zambia Watchdog as the only source of information. Even if we ignore the factthat republishing a story three weeks after it allegedly occurred does not leave The Star in a very good position, the real trouble in this case is did the original Zambia Watchdog post what plagued with inaccuracies, omitted information and sought no other objective than presenting a distorted view on Startimes operations in Zambia, and criticizing the PF. Here are three of the many inaccurate / incomplete claims in the blog post, Which all Subsequent reports cite.

# 1 - "[T] he deal hands over control of public broadcasting in Zambia to the Chinese for 25 years."
Even though the details of the 2015 agreement were not made public, the takeover of the public broadcaster by a foreign entity would require the amendment of the Zambia National Broadcasting Corporation Act, something Which would Not Easily pass through Parliament without a lot of publicity.

In 2013, Zambia's government indeed canceled the tender Awarded to Star Times for phase I of the digital migration, after complaints by two of the other four bidding companies, all of Which, by the way were Chinese (Huawei, ZTE, Gospel Digital Tech and King Tai Investments). HOWEVER, in 2014 Star Times which again Awarded the tender for phase 1, Which what completed in 2015, and then what Awarded tenders for phases 2 and. 3

# 3 - "Under the terms of the deal, Star Times Appears To Be Determined to exclude all other players from the market."

The contract not only does not give Startimes a monopoly over the provision of terrestrial television digital services, but the government has Introduced specific quotas for local content on new stations created after the opening up of frequencies.

There are probably two takeaways from this story, All which is neither the first nor will it be the last in the Which Chinese companies' investments in Africa are misreported. First, Chinese deals in the information and telecommunication sectors in Africa are Usually opaque, Which Means They are difficult to be Subjected to public scrutiny. This sometimes leads to Increased suspicion. A more transparent and open communication strategy by companies like Star Times, Huawei or ZTE Could Certainly reduce examined public skepticism. Second, the ease at Which inaccurate information can be circulated and Reproduced online these days makes it more important for journalists to follow basic professional standards: such as using multiple sources, checking for accuracy of statements and presenting all possible views on a story. Unfortunately, as this blog can testify, thesis are too oft forgotten.
Posted by Deborah Brautigam at 9:50 AM

This had me thinking. I'm working on a matter in Zambia and it would be a good idea if as part of the security package for the loan, the Zambian national broadcaster allocated 100 broadcast hours to the bank to air programming and commercials that stressed the benefits of the project and warns against defaulting on loan obligations on pain of being shut out of future lending.

Not trying to be facetious.

I believe populist resentment towards Chinese lending in Zambia is in itself a big contributor to default risk. Take a look at this transcript of a debate in the Zambian parliament from October 2015 regarding a US$500 million loan by China Development Bank to the Zambian Road Agency for the paving of roads in the Copperbelt. It's an outstanding commercial bargain. It's a low interest rate loan for a much needed project that will spur every kind of local economic activity including increasing agricultural productivity by connecting farmers to a wider marketplace.

Parliament member from Katuba Jonas Shakafuswa (Katuba) according to the transcript asks: "Why did we single-source lucrative contracts like the Copperbelt 400 (C400) and Lusaka 400 (L400)? We issued the contracts to one Chinese company, yet we have been saying that we want to grow our economy by empowering Zambian-owned companies. How will local companies participate when all the contracts are given to chocholis?"

A number of misnomers in his comment. It's not a lucrative contract, Chinese contractors compete fiercely and African projects are low margin, road construction requires expertise, despite the project being a good bargain with wide public benefit, the MP must dwell on anything negative he can latch onto. And to add a final insult, he uses a derogatory term for Chinese--in parliament!

This does not inspire confidence in lending to Zambia. It reflects a desire to fight China as a hostile force without grounding, and I can only imagine how bad the populist forces in Zambia maligning this loan as odious will be when there is a lot more economic stress.

There should be a lot of broadcast hours taken as a form of credit enhancement to tell Zambians what the loans mean for their quality of life. The win for Zambia in Chinese lending is clear but especially given the populism and coming economic crisis of the host country, I can't see where the win for China is.

Kai Xue, comments like your's are a very good example why people actually believe rediculous articles like the one discussed in this post. Taking over broadcasting content in exchange for loans is exactly what must not happen if the Chinese agenda is to create trust and mutual understanding.