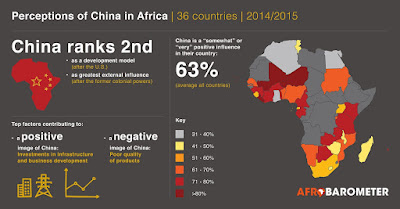 How do Africans view China's economic presence on the continent? The latest Afrobarometer survey reports that on average, 63% of Africans surveyed believed China to be a "somewhat" or "very positive" influence in their countries while "only 15% see it as somewhat/very negative." As Afrobarometer summarized:


Findings from Afrobarometer’s 2014/2015 surveys in 36 African countries, which included a special series of questions on China, suggest that the public holds generally favourable views of economic and assistance activities by China. Africans rank the United States and China No. 1 and 2, respectively, as development models for their own countries. Remarkably, in three of five African regions, China either matches or surpasses the United States in popularity as a development model. In terms of their current influence, the two countries are outpaced only by Africa’s former colonial powers.

Public perceptions not only confirm China’s important economic and political role in Africa but also generally portray its influence as beneficial. China’s infrastructure/ development and business investments are seen as reasons for China’s positive image in Africa, though that image is tainted by perceptions of poor-quality Chinese products.

While media reports may describe this as something new, in fact it is quite close to previous public opinion surveys on this issue. For data and links, see my past posts on China and public opinion in 2014 and 2010. For my comments on a poorly designed public opinion survey that came to the opposite conclusion from Afrobarometer's rigorous methodology, see here.

The full Afrobarometer report can be downloaded here.

What is hampering the educated masses of African people to fashion and lead development in their countries? How long must foreign nations hold the torch for our race? Africans must begin a process of introspection in order to claim their position in the global affairs.

What are you doing about it?