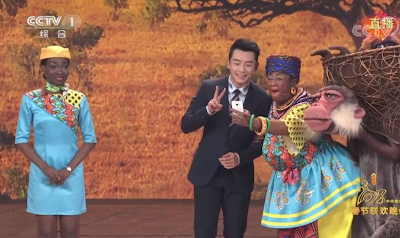 This past weekend, China's central television station CCTV broadcast a Chinese New Year celebration that featured a Chinese actress in blackface, with an artificial, large bottom, playing an African woman for comedic effect. Many people have been offended and outraged by this portrayal. The skit has been covered by the New York Times and a host of other media outlets. If the goal was to portray China-Africa relations in a positive light, it backfired big time.

A lot of people have contacted me about this video. After watching it, I was not outraged (but I live in Washington DC, where our standard for outrage is a moving target...).  I agree it was tasteless. It also reflected a "pat ourselves on the back" condescending attitude from the Chinese in the skit toward the "Africans". The Dragon's gifts? Cringeworthy indeed.

Yet in the media coverage so far,** I haven't seen much comparative or historical context for this kerfuffle.

China is still at the stage of cultural awareness and sensitivity that the US was in decades ago.  Back then, in Latin America, our government was trying to win hearts and minds through aid programs like the Alliance for Progress. Chiquita, the multinational company of "banana republic" fame, was portraying Latinas as voluptuous dancers with bananas on their heads.


Our media's concern over expressions of racism in China, even as relatively benign as this one, show how far we have come in the West in overcoming deeply entrenched racism.* But they also remind me how far we have to go. Yes, we have had blackface, yellow-face and red-face, with European actors playing those of African, Asian, and native American heritage. In West Side Story, the Latina heroine was played by Natalie Wood. The Lone Ranger’s Indian side-kick Tonto was played by a white man. And we still have dubious casting decisions that reflect "white-washing" -- see the uproar over a decision to use a 100% European actress (Emma Stone) to portray a woman who was half-European, half Asian/native Hawaiian).

At Halloween, we're still blithely dressing our kids in Carmen Miranda "Chiquita Banana" costumes, although as NPR and others have pointed out, many Latin Americans view this as offensive and racist.

Yes, we have progressed. Europeans no longer exhibit people from Africa in zoos. And recall Sarah Baartman and other 19th century "South African Khoikhoi women who, due to their large buttocks, were exhibited as freak show attractions" across Europe.

Today our racism is institutionalized. In the US, we no longer make it illegal for people of different races to ride together on a bus, eat together at a lunch counter, or marry the person they love. Yet as research and the Black Lives Matter movement shows, our racism takes these insidious forms: disproportionate incarceration rates; police brutality, and discrimination in employment, credit, and housing. These are much harder to overcome. (At home, China's equivalent racism is directed toward its Muslim and Tibetan populations.)

What's likely to happen in China? In recent years, China's economy has developed faster than any in the modern era. To those of us who first visited China in the 1970s, the social changes from 1978 onward are mind-boggling. Without much of a legacy of slavery, China's racism toward Africans has not been nearly as deep as ours in the US.

Research tells us that racism and cluelessness prejudices such as we saw in the CCTV broadcast are learned, they are not "hard-wired" in the human brain.*

Given this, I was encouraged to see, in the online comments, the internal Chinese debates over racism sparked by the media coverage. Change is happening.

If a thoughtful, respectful and friendly relationship with Africans is really desired in Beijing, they will allow these debates to continue among Chinese netizens. Conversations like this are part of how Chinese people will get "woke" to their racism.

--------
*For an interesting discussion of the research on "the origins of racism," see this link:  http://theconversation.com/the-origins-of-racism-8321
**After posting this, I read an interesting take on this published in Kenya. Hat tip to Magnus Fiskesjö. And here's a link to a fascinating and relevant 2016 blog post by Derek Sheridan on the infamous Qiaobi ad.

Posted by Deborah Brautigam at 1:26 PM