Neither Tightening Nor Loosening the Belt: Chinese Lending to African BRI Signatories

Author: Jordan Link, Research Manager at SAIS China-Africa Research Initiative
As representatives from more than 100 countries assemble this week in Beijing for the second Belt and Road Cooperation Forum, questions remain as the Belt and Road Initiative (BRI) nears its sixth year of existence.  Is the BRI a top-down plot for building China’s  road to global dominance? Or is it simply a means to “promote world peace and development” as offered by Chinese President Xi Jinping?
The BRI’s amorphous definition has complicated the issue – with projects ranging from port development and hydropower plants to facial recognition technology and a “Polar Silk Road,” Xi’s vision has simultaneously become omniscient and blurry.  If the BRI can encapsulate so many disparate projects, does the label matter?
Rather than getting bogged down in this debate, it can be helpful to think of the BRI as a new policy environment that encourages Chinese policy banks, firms, and contractors to engage with developing countries with more impetus than before.  While there certainly is a security dimension to this engagement, it is important to establish a strong understanding of how the BRI actually incentivizes Chinese entities abroad.
To that end, how successful has Xi Jinping been in creating a BRI-inspired policy environment that encourages Chinese international economic engagement?  Analyzing Chinese loans to Africa provides rich data on the subject.
Since the BRI’s announcement in 2013, 37 African countries have signed BRI Memorandums of Understanding (谅解备忘录).  Of them, 28 were signed during the 2018 Forum on China-Africa Cooperation (FOCAC). 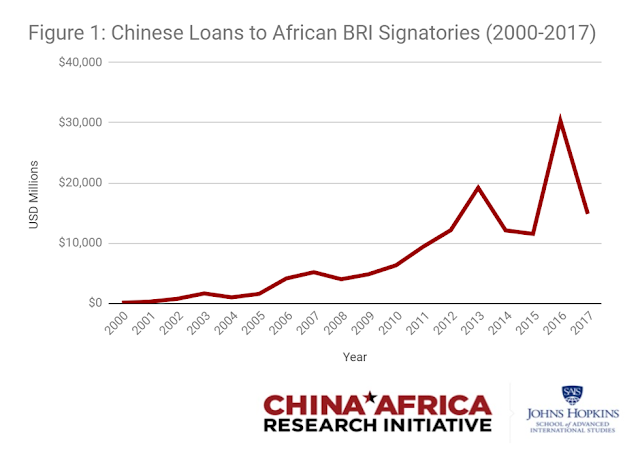 Looking at the aggregated data of all African BRI Signatories (Figure 1), the connection between the announcement of the BRI and Chinese loans to Africa appears to be weak.  Chinese loans grew consistently from 2008 to 2013. Counterintuitively, lending totals dropped remarkably following the announcement of the BRI in 2013 and did not increase again until 2016.  Even after a massive spike in 2016, lending totals dipped below their 2013 levels in 2017.
The picture becomes more stark when removing Angola from the analysis (Figure 2).  Angola is one of China’s major oil suppliers, and Chinese banks have long provided oil collateralized loans to the Angolan government and its state-owned oil company Sonangol. These are repaid through oil exports. To meet balance of payments problems caused by price of oil plummeting in 2014, Angola negotiated a large infusion of finance in 2016. Further, while Angola has signed a BRI memorandum of understanding, its location on Africa’s Western coast does not appear as a major node on any official Chinese BRI maps. 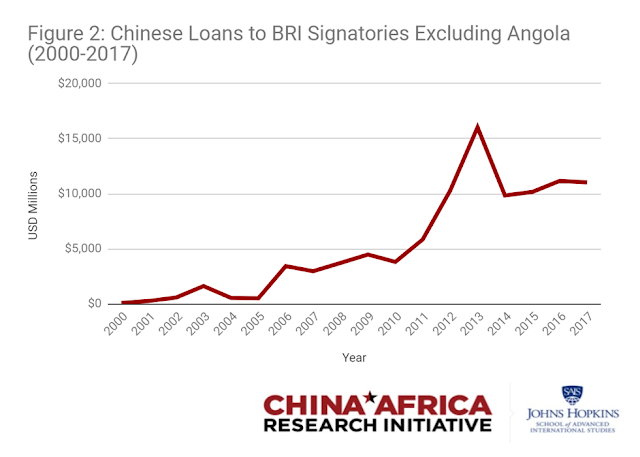 Removing Angola from the analysis shows a sharp decrease in lending to other African countries between 2013 and 2014.  Since 2014, the amount of total lending has hovered around USD 10 billion per year. While this is certainly a large amount of lending, the BRI has not dramatically increased Chinese loans to Africa. As the Initiative was only announced in October of 2013, the lending spike for that year likely should not be interpreted as a coordinated response to the unveiling of the BRI.  As such, the Belt and Road has not significantly increased Chinese lending to African countries: rather, it has simply sustained total annual lending levels.
Sources of Lending
The two largest sources of Chinese lending to African countries are the Chinese Eximbank and the China Development Bank (CDB).  Since the announcement of the BRI, the Chinese Eximbank has lent African BRI signatories (excluding Angola) nearly USD 28 billion (Figure 3).  Across the same time span, the CDB has lent African BRI signatories (excluding Angola) over USD 5 billion (Figure 4). 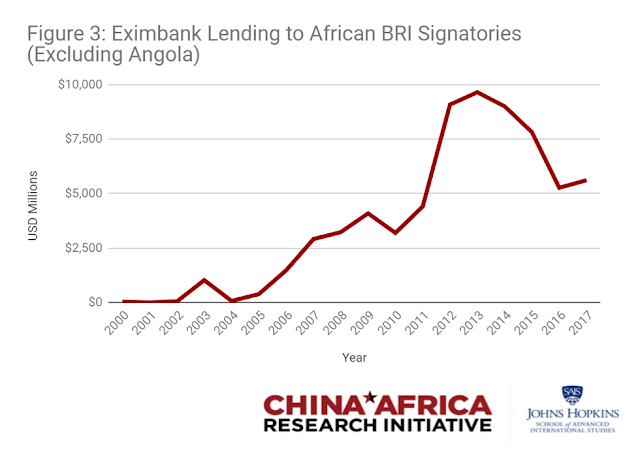 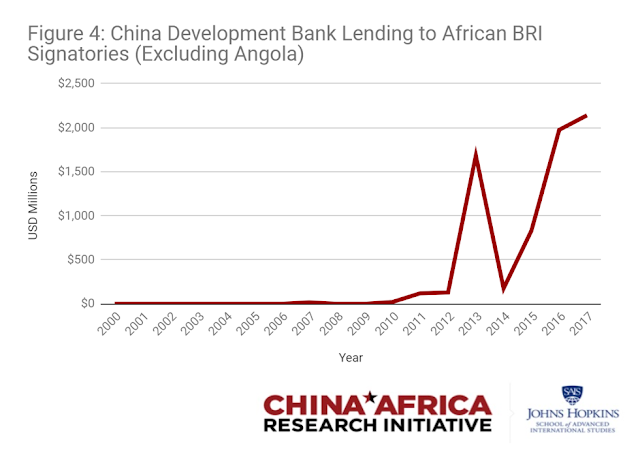 While the Eximbank is by far a greater source of lending, the CDB appears to have heeded the call for BRI financing to a greater extent.  Eximbank lending has fallen every year following the announcement of the BRI besides a slight uptick in 2017. On the other hand, the CDB’s lending amounts to African BRI signatories have risen dramatically since 2014.
Transportation Infrastructure
Interestingly, the announcement of the BRI has not had a positive impact on Chinese lending for African transport infrastructure development – China’s long time comparative advantage on the Continent and a major thrust of the BRI.  Surprisingly, lending for transport infrastructure dropped by a significant amount from 2014 to 2015 – nearly a USD 4 billion decrease (Figure 5). In 2014, Kenya signed two loans for its Standard Gauge Railroad for a total of USD 3.6 billion.  This amount was split amongst two loans – a concessional loan for USD 1.6 billion with a two percent interest rate and a commercial loan for USD 2 billion at LIBOR + 360 base point interest per year. Transportation infrastructure lending still has not returned to its pre-BRI annual total. 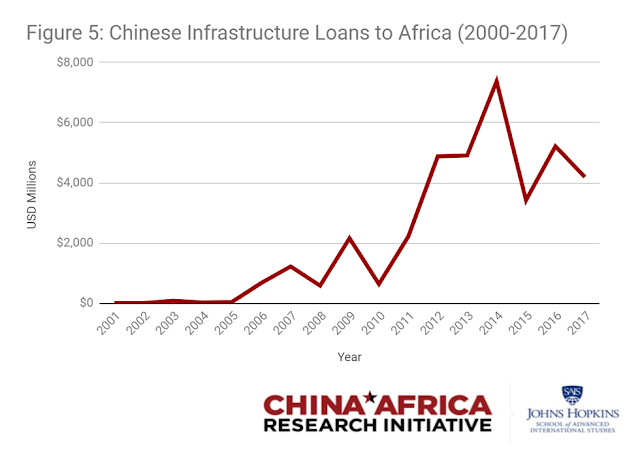 A close examination of Chinese loans clearly displays that so far, signing  up for the BRI has not increased Chinese lending to African BRI signatories. Counterintuitively, for the continent, lending dropped significantly immediately following the announcement of the BRI.  Since then, it has hovered around the same annual amounts (Figure 2). In particular, the Chinese Eximbank, the largest source of Chinese lending to Africa, has significantly dipped its lending totals since the announcement of the BRI.  If Xi Jinping is using the BRI to marshal a confluence of economic and strategic gains in Africa, increased Chinese loan totals have not been a key factor.
While conventional wisdom and fanfare surrounding the BRI would seem to imply a greater involvement for Chinese policy banks abroad, that is simply not the case in Africa, as lending levels to African BRI signatories have remained stable since 2014. However, if the BRI is viewed as a new policy environment encouraging Chinese policy banks, firms, and contractors to conduct business with African BRI signatories, the doors for lending remain open without clear signs of closing.
Posted by SAIS CARI Team at 10:46 AM