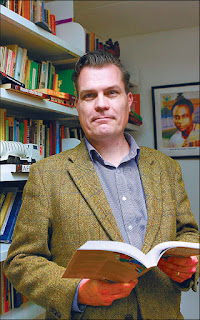 African Studies, International Relations, and our small world of China-Africa researchers, lost one of its towering figures on February 22. Professor Ian Taylor died at the age of 52, after a short and brave battle against cancer.

Ian was at the peak of an astounding career: the author or editor of 12 books, with over 80 refereed journal articles in his vita. He leaves behind his wife Jo, two children, Archie and Blythe, a brother and other family members and colleagues. He was very well-loved.

For those who were fortunate to know him, Ian was literally larger than life:  tall, handsome, and kind, a generous mentor who taught a generation of students at St. Andrews University. He had a wry humor, and his energy was meteoric. And now it turns out that his life, too, was like a shooting star that explodes in a burst of color, light and energy and then is over, much too soon.

I first met Ian through his work. In the 1980s and 1990s, Philip Snow (who wrote a fantastic book The Star Raft in 1989) and I seemed to be the only people interested in the obscure topic of China and Africa. I had published an article in 1994 in the Journal of Commonwealth and Comparative Politics on China's export of development ideas through its foreign aid to Africa, an article which quickly fell into obscurity. And then, out of the blue, I had a letter from the JCCP editors asking me to peer review a paper they'd received that was also about China and Africa. This became "The 'Captive States' of Southern Africa and China: The PRC and Botswana, Lesotho and Swaziland,' Ian's first refereed journal article.

Ian started his China journey in Hong Kong, where he studied Mandarin at the University of Hong Kong, earning an MPhil there in the mid-1990s. Our paths crossed increasingly often after that initial paper. Ian was always up for a long discussion about African development, or China's role on the continent. Our encounters often highlighted his zest for life outside the academy. Once, for example, Ian and I were both at a China-Africa conference near Charlottesville, Virginia. Afterwards, instead of heading directly to the airport, he rented a car and spent a couple of days driving and hiking in the Shenandoah mountains, exploring Virginia. In April 2010, he invited me to a conference at St Andrews. After my talk, he brought me home, where I met Jo, Archie and Blythe. We then spent the rest of that sunny Saturday on a memorable mini-tour of the coast of Scotland, visiting the church where he was an elder, walking in the villages along the coast. In 2015, Ian joined our new CARI team as a research affiliate, helping us launch our ESRC China-Africa research project at an event in Addis Ababa.

Ian wrote to me in June last year to share the news of his grave diagnosis. In his usual full-hearted way, he was embarking on this journey with optimism, fortitude, energy, and deep appreciation for the people who were now going to be his new colleagues. "It looks like I have got a bit of a trek ahead of me," he said. "Definitely getting my taxes back through the treatment! The health people have been brilliant, and I can't complain about anything at all."

Ian leaves behind a vast legacy, on a personal and professional level. His many honors bear witness to his vibrant mind, always questioning, seeking answers, and sharing what he learned with all of us around the world. And this will live on.

Posted by Deborah Brautigam at 11:57 AM

Ian is etched on our mind. His works were among those that triggered my interest in the Africa-China discourse.

This is sad news. Thank you for sharing Dr. Brautigam. Although I had not had the pleasure of meeting Ian Taylor, his work played an important role in my dissertation research.

Unbelievably sad. Ian did several brilliant talks for my program and was a delight to interact with.

My sympathies to his family, friends and colleagues.

I'm very much disturbed to hear the death of Prof. Ian Taylor, my instructor and dissertation supervisor! My heart is broken beyond any measure! My eyes drop much tears when I think about this kind, generous, diligent and level-headed scholar. Words are not enough to express my feelings!

Thank you for this vivid and moving memorial, Prof. Brautigam. What a fine scholar and teacher we have all lost.

So very sorry to hear this news. I had the honor of having Ian Taylor serve on my PhD thesis committee at Jawaharlal Nehru University (JNU) in New Delhi, where I focused on India-Africa economic relations. Ian was so helpful and supportive with his comments, and gave me helpful suggestions for turning my thesis into a book. He was brilliant, generous and kind, and will be missed.