Chinese Aid in Cambodia: How Much?

China is not very transparent about its aid on a country or regional basis. There is no place on the internet where you can download Chinese aid statistics, in contrast to Western donors who report their aid to the OECD's Development Assistance Committee (DAC). This is why in recent testimony to the U.S. Congress, an expert on Southeast Asia, Ernest Bower, could say:

Bower presumably said this with a straight face. I've written skeptically about that very questionable Congressional Research Service (CRS) report in an earlier post, "Billions in Aid". The report uses a very peculiar definition of Chinese "aid":  all capital flows with links to the Chinese government, its state-owned companies, or its banks. Commercial bank loans, investment, export credits: they're all called "aid". The report explains this definition, but then it compares its Chinese "data" (all gleaned from the internet by a group of students, itself problematic) to official development assistance (ODA) from the West, which explicitly does not include commercial bank loans, investment, or export credits.

But it's the Congressional Research Service! Can we blame Bower for not second-guessing this report?

With just a little searching, he could at least have found some real data on Chinese ODA in Cambodia. Several years ago, the Chinese embassy in Phnom Penh began to report its official development aid disbursements for Cambodia. These are collected in the annual Cambodia Aid Effectiveness Report (the most recent one I could find was November 2008 which lists all the years from 1992 to 2008, with estimates for 2009 and 2010). This fits with statements in a Brookings report, among others, that the Chinese participated in the Cambodia Development Cooperation Forum in 2007, and contributed data on their aid disbursements. This is something that donors across Africa would love to see happen there (and I would love to know more about how/why this happened!).

So how much official aid is China giving to Cambodia? And how does this compare with "the West"?

China's aid to Cambodia has been in the media several times, with very large sums mentioned. In 2006, the BBC wrote that China's "aid" commitments were $600 million, the same as the total commitments from all the other donors combined. This has been very widely circulated as an alarming "fact".  Similarly, in December 2009, when a visiting Chinese leader signed off on 14 separate agreements, it was widely reported that China was providing $1.2 billion in "aid" to Cambodia. (In fact this news about Chinese commitments came from the Cambodians, not the Chinese, who rarely have press releases containing aid or loan figures.) 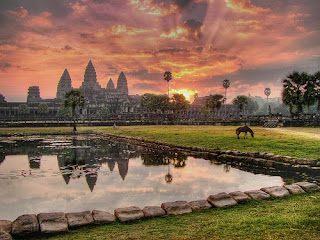 China surpassed the US as a donor to Cambodia in 2006, when the US disbursed $51 million, an annual figure that has remained fairly consistent in recent years. But Japan's aid was higher than China's for every year until 2009 when China was expected to overtake Japan. Aid from the UN agencies was far, far higher than aid from China, every year, as was aid from Europe. In fact, from all non-Chinese donors, Cambodia received official development assistance disbursements of $660 million in 2006 and $698 in 2007 (for more recent years, the data on some donors was incomplete).

How should we interpret the large figures mentioned in the press? For one thing, the Chinese practice is to sign a number of different official agreements concerning aid, export credits, and even investment together. Agreements are usually negotiated separately, and well beforehand, but then held off until a high-level Chinese official is visiting, so that they can be signed together in a big ceremony. This also means that these agreements refer to commitments that will take place (or be disbursed) over a number of future years. Unlike other donors, the Chinese do not make new commitments annually, even though, of course, they have their own annual budget for aid expenditures. So these multi-year figures should not be compared with annual commitments or disbursements from other donors.

Further, some of the commitments signed in 2009 are clearly export credits, not aid. We have a Cambodian report on the 14 agreements signed at the time the figure of $1.2 billion was mentioned:
These agreements are very vague. The concessional loans would qualify as official development assistance or ODA, but according to DAC rules, the favorable ("preferential") export buyers credits would not qualify as ODA. Even if they were concessional, they would not be reported as ODA by the Chinese if they were following DAC rules. (For me, this list raises even more mysteries. Why are some roads financed by concessional loans and some by preferential export buyers credits?)

Could the list above add up to $1.2 billion? Perhaps, although it seems unlikely to me. But even if the figure of $1.2 billion is realistic, remember that these are agreements for projects that will take place over some years to come. Chinese aid is rising sharply, but it would be an error to view "aid" as rising from "$600 million" to "$1.2 billion" and then compare this with annual ODA commitments from wealthier donors. On an annual basis, ODA from China to Cambodia is likely to follow the trend set by Japan, which has also been concentrated in transportation, and which has averaged around $100 million per year.

One last point: Brendan Brady, a journalist based in Cambodia, wrote in a story on CBC.com that the $1.2 billion referred to Chinese investment. In fact, Chinese companies want to invest in at least two new, large BOT hydropower projects that will, together, cost around $1.1 billion. At least one of these has secured finance from China Eximbank. This could have been part of the discussion in December and the $1.2 billion. But more on that in a subsequent post.
Posted by Deborah Brautigam at 8:12 PM