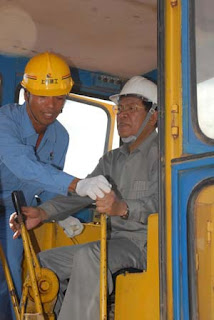 Guest Blogger Kate Griffiths is completing her MSc degree in Geosciences at the University of Sydney in Australia. Kate recently completed fieldwork in Cambodia, and reports here on her research on Chinese and Western donors. Kate finds that the Chinese have been participating (a bit) in the donor forums. Two things are particularly interesting about this. First, as Kate points out, the World Bank (which commonly chairs donor forums in poor countries) is headed in Cambodia by someone who is himself Chinese. Second, the donor forum (Cambodia Development Cooperation Forum) is headed by the Government of Cambodia, not the World Bank. Might these help explain this unusual cooperation? Or is Cambodia a Chinese experiment, "crossing the river by feeling the stones?"

"It is widely assumed/reported that China does not participate in western-led aid structures. However, is this always true? In Cambodia, it appears that China is in fact moving towards some degree of greater transparency and participation in the Western aid-dominated landscape.

Cambodia is an aid dependent country, with nearly half its annual budget coming from aid. Most DAC member countries are represented in Cambodia, as are the big multilateral agencies including the World Bank, ADB and UN. Added to this, there are also hundreds of local and international NGOs represented in Cambodia such as Oxfam, World Vision and NGO Forum. Since the Paris Peace Accords of 1991, and subsequent UNTAC period, western donors have come to dominate the aid landscape in Cambodia and consequently have had a disproportionally large role in shaping Cambodia’s development strategy. They have tended to set the agenda, influence government policy and promote western development ideology. Particular foci of the traditional donors in Cambodia include good governance, democracy reforms, judicial reform, and agricultural development.

However, since the mid-2000s, another aid player has come to the fore in Cambodia – and this is China. China has, in fact, been giving aid to Cambodia for around the same length of time that the western donors have, although it is only recently that attention has begun to be paid by the media, researchers and policy analysts to China as an aid donor in Cambodia. In 2006, the media fell over itself to report that China had matched the entire western aid pledge for that year, by pledging $600 million versus $601 million pledged by the DAC donors at the Consultative Group Meeting. (e.g. see BBC 8/4/2006; Asia Times Online 6/10/2006; NY Times 17/9/2010). However, whilst Chinese aid figures to Cambodia have increased, they are usually nowhere near the inflated figures reported in the media (see Chinaafricarealstory May 17, 2010). For example, the aid disbursement reported by China for 2006 was only $52.3 million and for 2007 $92.4 million (Cambodia Aid Effectiveness Report 2008), even combined nowhere near the $600 million as reported by the media. According to the latest Cambodia Aid Effectiveness Report (2010), Japan is still the largest donor to Cambodia (a position it has held for many years), followed by China. Both countries have, however, significantly upped their aid between 2008 and 2009 (17% and 20% increase respectively). This is in line with overall trends in aid to Cambodia which have been on the increase. China has disbursed 85% of its total aid to Cambodia since 2004 according to this report.

China can therefore be seen to be a major player when it comes to aid in Cambodia. But how transparent is China about its aid, and to what degree does China participate in the dominant western-led aid structures in Cambodia?

China does make some of its aid figures publicly available in Cambodia. It does this by entering information on its aid program into the Cambodia ODA database. This is a public online database which is maintained by the Cambodian Rehabilitation and Development Board (CRDB) of the Council for the Development of Cambodia (CDC) for the Royal Government of Cambodia (RGC). Whilst this is a RGC owned and managed database, the database was created in order to fulfill the aid effectiveness structures put in place by the western donors in accordance with the Paris Declaration. Each donor is responsible for entering its own aid figures. Click here for details of China’s contribution to the database.

Information from this database is used to produce the Cambodia Aid Effectiveness Report which is tabled at each Cambodia Development Cooperation Forum.The latest Cambodia Aid Effectiveness Report is from May 2010. According to this report, China provided USD 114.7 million in aid in 2009 to Cambodia. This formed part of the USD 989.5 million in aid disbursements received in total by Cambodia in 2009. China’s aid disbursements increased 20% between 2008 and 2009, with most of China’s aid going to the infrastructure sector.

Aside from publicly releasing aid figures in Cambodia, China also participates in some of the existing western-dominated aid coordination structures in Cambodia. For instance, China has been represented at the last three Cambodia Development Cooperation Forums (CDCF). At the 2010 CDCF, China sent four representatives including the Ambassador, and Economic and Commercial Counsellor. These meetings are held every 18 months or so and are the official government/donor forum whereby donors indicate aid pledges for the upcoming year(s) amongst other things. These meetings are chaired by the Royal Government of Cambodia, although they are very much dominated by the western aid discourse with topics of conversation including aid effectiveness, Millennium Development Goals, governance reforms etc. The World Bank is the lead donor facilitator, and is responsible, along with the RGC, for opening and closing remarks. Whilst China does not actively participate in the meetings in terms of speaking to the agenda items, China does, like DAC donors, give an indication of what its aid pledges to Cambodia for the next three years will be. Click here to see China’s indicative aid pledges for 2010-2012.

China has also been known to attend informal monthly lunch meetings held between western bilateral and multilateral donors in Cambodia. These meetings are arranged by the World Bank and provide a less formal forum to discuss aid and development in Cambodia. The Country Manager of World Bank in Cambodia is Mr Qimiao Fan, himself Chinese, although western educated. He has previously worked as a senior executive in the private sector in China. At his request, China sometimes attends these meetings but to date has not actively participated in debate (although this could relate to language barriers – the usual language used is English – as much as anything else).

Thus it appears that in Cambodia, China is, to some extent at least, signaling an intention to participate in some of the existing aid structures. This is not, of course, to say that China is in any way adopting the DAC norms (for instance around ODA definitions, or policies such as the Millennium Development Goals) or being completely transparent with its aid figures (I certainly could not get any aid figures out of the Chinese Embassy in Cambodia when I asked). However perhaps we are seeing a move by China towards greater cooperation with western donors, or at least a move towards more openness in the case of aid to Cambodia."

Thanks, Kate!
Posted by Deborah Brautigam at 11:49 AM

Very nice piece! I attend Roanoke College, and China-Africa relations is one of my interests. I always thought that China was outside the mainstream when it came to aid projects, but this shows that it can use western aid structures. I also do a blog on politics and foreign policy called power walk, check it out.