BBC Where Art Thou? Another (Un)Balanced VOA Story on China in Africa 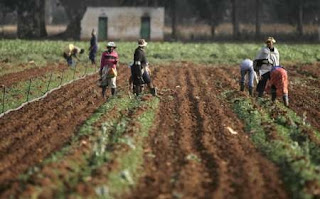 In a June 28, 2011 article with the thoughtful title: "China Supports Global Pariahs, Gets Resources and Criticism in Return," the United States' official broadcasting system Voice of America continued a series on China's overseas engagement. Here are some of the balanced analysts they're quoting: Greg Autry, co-author with Peter Navarro of the book Death by China and economics professor at University of California Irvine, and Peter Navarro, author of the polemic The Coming China Wars. Here's a sample of the analysis.

"Zimbabwe has everything from diamonds to tobacco and farm land," says Peter Navarro, an economics professor at the University of California, Irvine. "China has gone in there and there are a lot of Chinese farmers there now tilling Zimbabwean soil growing crops that are sent back to China while the people of Zimbabwe starve..."

There is a lot to be critical of in China's engagement with Mugabe, but sending a lot of Chinese farmers to till the soil is not one of them. Yes, China imports a lot of Zimbabwean tobacco. Two Chinese companies operate out-grower schemes buying tobacco from Zimbabwean farmers. Another Chinese project contracts with Zimbabwean cotton growers.

Later on the article repeats another of the myths floating around the internet:


China International Water and Electric Company ... has lease holds on over a quarter of a million acres of land in southern Zimbabwe for the raising of maize, which it exports back to China.

This zombie of a story -- another of the "rural legends" floating around the internet (this one was launched in 2003) -- is hard to kill off. But it is bogus. (I explain what really happened in The Dragon's Gift). It's also been embellished. The original version claimed that CIWEC was producing maize for Zimbabweans. Now the VOA, without checking, "reports" that CIWEC is exporting food back to China while Zimbabweans starve.

Oh BBC, where art thou? A hat tip to Henry Hall for the story.
Posted by Deborah Brautigam at 5:00 PM