The Economist has a new feature on aid from developing countries (August 13th, 2011): "Charity Begins Abroad: Big Developing Countries are Shaking Up the World of Aid."

A lot of the article appears to be accurate. But with regard to China's aid, not surprisingly, it gets a few big things wrong or partly wrong. Here are three:


But second on the list, if reports monitored by New York University’s Wagner School are to be believed, would be China, which gave away $25 billion in 2007. (Statistics on aid from new donors are dodgy and the line between aid and trade is blurred; by another count China’s officially reported aid was only $1.9 billion in 2009.)

Sigh. As I have posted a number of times, this so-called monitoring by "the Wagner School" was actually a project done for the Congressional Research Service by students who collected rather indiscriminately all the media stories they could find on any aspect of Chinese state engagement in developing countries, defining this as "Chinese aid". By mentioning this thoroughly discredited statistic, even if with a hint of doubt, The Economist continues to give it credence.

The second statistic is the dollar translation of China's budget figure for external assistance in 2009. This is an accurate (and official) figure, but it does not include the face value of the concessional loans, only the direct subsidy required to make them concessional. As the loans are expected to be repaid, and thus are not a donation, this is a more accurate figure for the real budgetary outlays made by the Chinese government for (net, not gross; disbursed, not committed) official assistance.


At the same time, China has become a far bigger donor. Wen Jiabao, the prime minister, has promised that in 2010-13 China will provide $10 billion in low-interest loans to African countries, bolster the China-Africa Development Fund by $1 billion (bringing it to $5 billion) and cancel debt owed by highly indebted countries with which China has diplomatic relations.

Yes, Wen Jiabao said that China would provide $10 billion in low-interest loans to African countries between 2010 and 2012 (not 2013). This pledge was made at the November 2009 FOCAC; these pledges go on three year cycles. Some of these loans will be "concessional" (you hui dai kuan) and some will be preferential export credits (you hui mai fan xin dai). Technically, only the former would qualify as official development assistance by the OECD's guidelines. Even if they all were to be counted as "aid", this would amount, on average, to $3.3 billion per year, divided among the 49 or so countries with which China has diplomatic ties, or an average of about $67 million per country, per year.

On the other hand, the China Africa Development Fund, which has been capitalized with $1 billion, and which is now scheduled to raise its second billion (it will only reach $5 billion at full maturity, at some distant point), is not aid, but investment: equity finance in support of FDI (foreign direct investment) by Chinese firms.

Finally, the debt to be canceled is not all debt, but, as stated by the Chinese, overdue debt from zero-interest loans, a modest portion of China's aid. It's important to get that right, as borrowers reading The Economist may believe that China is going to cancel all their debts, including concessional loans and commercial debts. No way.

(3) Spinning Without Evidence: The article suggests, without any evidence, that some of the infrastructure projects financed by Chinese aid were done in support of China's resource extraction goals. And it states, falsely, that China has "modernized the port" of Dar es Salaam:


Many of its aid projects help build infrastructure that benefits Chinese investment. It has helped rebuild the Tanzam railway, for example, linking Zambia’s copper belt, where China has large projects, and Dar-es-Salaam, where it has modernised the port. The white paper seeks to counter Western views that much of its aid goes to feed its appetite for oil and minerals. It says only 8.9% of concessional loans have been used to support the extraction of such resources. But it gives no details. Much of the 61% of loans for transport, communications and power may also help mining efforts.

By not being transparent about their aid, the Chinese government leaves themselves open to this kind of accusation. However, my own database supports the claim that China's aid is not distributed in support of Chinese resource extraction projects (these are mainly financed directly by the companies, with a few exceptions as in the Congo Sicomines project, which is financed by non-concessional loans from China Eximbank). 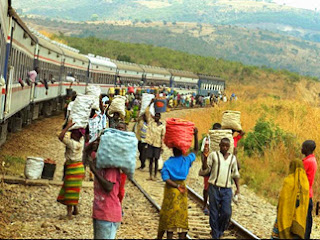 So what about the two examples mentioned by The Economist?

The idea that the iconic Tanzam railway -- built as a Maoist project in the 1960s-1970s to allow Zambia's exports to bypass apartheid controlled South Africa -- was rebuilt to serve China's resource interests is probably not the case. The expensive railway has been continuously supported by Chinese aid (the World Bank has also financed some Tazara modernization) for the past 35 years during which it transported the region's resources to Europe. Now they are going to China. But using aid to support the Tanzam railway all these years has been far more about politics and China's soft power than it has been about resource extraction.

Furthermore, the statement that China has "modernized" Tanzania's port with its aid dollars in order to extract resources seems to be false. The bottom line is that China has not (yet) financed any construction at the port. The Tanzania Port Authority reported in June 2011 that it was still in discussions with the Chinese government in the hope that it would finance the $523 million cost of constructing two new container berths (#13 and #14), probably on a Build Operate Transfer (BOT) basis using a public private partnership (PPP) arrangement, as recommended by the World Bank.

If China does finance this construction, is it likely to use a concessional loan to do so? Possibly. In January 2010 the Chinese offered Tanzania a line of concessional credit for $180 million to be used in a number of projects over three years, with discussion ongoing on finance for other projects (including the port). Chinese companies are interested in getting the contract to build this project, but if it is to be financed by a Chinese bank -- no sure thing -- I predict it will be on commercial lines, BOT, and with a commercial profit in mind -- and not aid.

The Economist suggests that the Chinese are blurring the boundaries between aid and investment. I don't see that, but what I do see is that they have a lot more instruments for promoting development than our governments do. We need to move away from the narrow pattern of thinking that our "help" for African development can only come in the form of aid.
Posted by Deborah Brautigam at 5:01 PM