Why Are We So Critical of China in Africa? 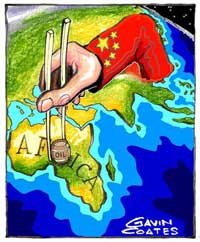 The German newspaper Die Zeit has published an op-ed "Why are we so critical of China in Africa?" that I co-wrote. The English version can be found online at the German Development Institute). We make three points challenging the conventional wisdom about the size of China's aid flows, the alleged links between Chinese aid and natural resource investments, and the impact of Chinese aid on governance and human rights.

The final edits for the column deleted a portion that I wrote:

Sensational stories may sell more newspapers, but their exaggerated (and often erroneous) claims do no service to a realistic and balanced understanding of a growing power. As just one example: on July 28 the Frankfurter Rundschau carried a story saying “China’s practice of buying up land” had contributed to the famine in Ethiopia, based on a statement by Günter Nooke, the German Chancellor's G8 Personal Representative for Africa in the Federal Ministry for Economic Cooperation and Development. Research we and others have done in Ethiopia show that Chinese private companies are active in infrastructure and mining but are not buying up land. As a field study of Ethiopian land grabs by the Oakland Institute in California published in June this year said: Chinese companies “were surprisingly absent from land investment deals.” The German media missed that story.

Just wanted to be sure that this point gets made somewhere -- even if not in Die Zeit :)

Posted by Deborah Brautigam at 9:30 AM