Michael Sata and China in Zambia

﻿While Michael Sata was winning the Zambian election, I was next door in Tanzania, doing research in Morogoro, and without internet access. The election, and peaceful transition, bode well for Zambia. They voted for change. How will this affect China's role in Zambia, or in Africa more broadly?

Foreign Policy's blog described the election as "a setback for China." Sata's victory is widely seen in the West as "a vote of no confidence against [China's] existing projects" in Zambia. The Atlantic carries a more thoughtful piece along the same lines by the experienced reporter Howard French. 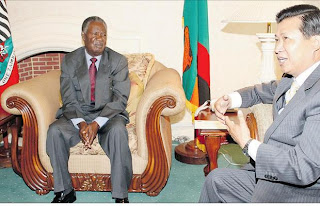 But look more closely. Sata's initial steps after the election confirm the importance of the relationship with Beijing:  his first official appointment at State House was with China's ambassador Zhou Yuxiao (right). Sata emphasized that Chinese investors need to respect Zambian laws. The ambassador nodded.

In the 2006 election, which he lost, Michael Sata famously played the China card, with relentless attacks on Chinese "infestors". However, reports that "China" (an earlier Chinese ambassador) threatened to cut ties with Zambia if Sata won the (2006) election usually fail to add that Sata promised to recognize Taiwan as an independent country if he won. This pledge was nowhere in evidence in the 2011 election. Sata toned his rhetoric down considerably in this round.This could be seen as a win for Beijing.

During the campaign, Sata signalled that he would continue the Zambian government's support for foreign investment. Close observers like Chanda Chisala emphasize his pragmatism and, surprisingly, his management skills.

If Michael Sata carries out his campaign promises, we should be seeing greater attention and more money for enforcing labor rights and safety standards in Zambian mines, where the Chinese are the worst offenders. All of the mines (which include non-Chinese companies: London-listed Vedanta Resources, Canada's First Quantum Minerals and Swiss commodity giant Glencore) could be hit with higher royalty rates and/or windfall taxes. Sata has also warned that he will be enforcing work permits, limiting the number of expatriates allowed to enter to work on projects.

We could also see a crackdown on Chinese informal traders operating without permits in Lusaka's Kamwalla market and elsewhere. China's close friend Tanzania has done crackdowns like this twice since 2008. Apparently, it was a great success: I saw almost no Chinese traders in the large Kariakoo market in Dar es Salaam on this trip, a big change from 2008. The crackdown also did no harm to the official ties between the two countries.

It remains to be seen if other African opposition politicians see Sata's win as a lesson in playing the China card. Ironically, Sata was a far more lively "China basher" in the 2006 election, which he lost. But so far the new pragmatism from the "fiery populist" and the first few days of a Sata presidency do not herald a sea change in China-Africa relations. If China and Zambia move fairly smoothly into this new stage, we will have yet another example of how the Chinese emphasize relations with states, but not a particular leader or regime.
Posted by Deborah Brautigam at 6:49 PM

More so if you an African nation with immense infrastructure needs, lack Oil and Gas reserves or do not harbor terrorists - and you don't want to depend solely on humanitarian aid.

The West will only invest heavily if you fulfill the above-mentioned criteria. Zambia does not, hence the need for China.

That is exactly why Sata had his first discussion with the Chinese ambassador (the most important non-Zambian figure in Zambia).

China is not indispensable... there are many other countries interested to invest for sake of return, use them for development, of Zambia.