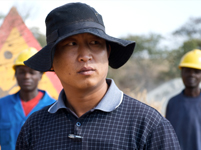 Some time ago I had the pleasure of previewing a stunningly good film: When China Met Africa, directed by Nick Francis and Mark Francis (assisted by China-Africa expert and Paris-based Ph.D. student Solange Chatelard). The filmmakers are now organizing a US tour (to learn more, click here). View the trailer here.

"A historic gathering of over 50 African heads of state in Beijing reverberates in Zambia where the lives of three characters unfold. Mr. Liu is one of thousands of Chinese entrepreneurs who have settled across the continent in search of new opportunities. He has just bought his fourth farm and business is booming.
In northern Zambia, Mr. Li, a project manager for a multinational Chinese company, is upgrading Zambia's longest road. Pressure to complete the road on time intensifies when funds from the Zambian government start running out.
Meanwhile Zambia's Trade Minister is en route to China to secure millions of dollars of investment.
Through the intimate portrayal of these characters, the expanding footprint of a rising global power is laid bare - pointing to a radically different future, not just for Africa, but also for the world."

I endorsed the film for Bullfrog Films:

Remarkable. A compelling, unsentimental and very honest portrait of an encounter between two continents pulled together by profits and politics. The filmmakers had extraordinary access to their three central characters, and the trust they obviously built is never betrayed...Viewers will have no difficulty following these multi-layered dramas--at once ordinary and powerful...The format lends itself exceptionally well to discussions: viewers will find they each saw something different. Intimate, moving and very real.

"A gritty, vivid picture of the new Chinese presence in Africa, from the pompous officials negotiating deals, to the dedicated engineers trying to build roads, to the hardscrabble immigrant Chinese farmer struggling to tame the land and motivate and pay his local workers. It is a new relationship, full of both hope and suspicion, common interest and cultural friction. Driven by economic need, the two sides struggle to bridge the huge gaps between them."

For another story about this film by someone who was also blown away by it, see the article by Damien Ma in The Atlantic

Posted by Deborah Brautigam at 9:14 PM