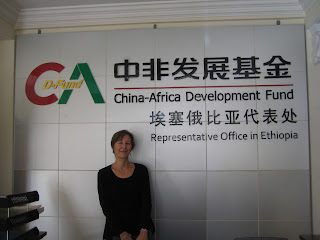 China Africa Development Fund, the equity investment arm established by China Development Bank and launched at the 2006 Beijing Summit of the Forum on China Africa Cooperation, has failed in its effort to raise $2 billion on the capital markets. Instead, says a story published by China's vigorous economics newspaper Caixin, the state will arrange a second injection of foreign exchange:   "The fund’s parent, China Development Bank (CDB), arranged the US$ 2 billion worth of eight- to 10-year loans at bargain interest rates after CADF’s cash injection plan, some two years in the making, won State Council approval in March."

Chinese private funds and investors were not tempted by the potentially high returns on offer in Africa. And they were put off by the CADF's mission of holding shares for at least five years and potentially longer, to give projects a chance to mature. Caixin's analysis reinforces some of my points about China following the Japan path. Here's Caixin again:

One mistake in the article. An anecdote said to be about Libya is actually about Liberia (below). This interesting story illustrates the independence of state-owned companies. They couldn't be compelled to take over a politically important project. But it also shows something unfortunate about CADF: apparently, it could be compelled.


"A private company from China had signed a US$ 2.6 billion contract with the government of Libya [Liberia] for a mining project. But the Chinese side couldn’t fulfill its obligations, so it put the project up for sale. At the time, state-owned steel companies were unwilling to get involved partly due to perceived risks of doing business in Africa. CADF assumed 85 percent of the project and negotiated a settlement with the Libyan [Liberian] government, making the project more appealing to potential Chinese buyers. Later, Wuhan Iron and Steel Group bought a 60 percent stake."

See the original story on China-Wire.org, a great website that aggregates stories on China themes.

Posted by Deborah Brautigam at 12:25 PM

CAD Fund not attractive Enough in China"
This title is already a shortcut.
Chinese business deals are often nontransparant and once Africa is involved this becomes even the norm.
The only thing I can get from the available information is that the subscription conditions did not please the professional investors.
The government-backed PE fund (China Africa Development Fund) mentions that it is targeting double-digit returns on its investments (ROI).
If the CAD pursues this worldwide then both private and institutional investors surely must be interested.
From my experience with investors in risk-bearing capital, they would just do everything to minimise those risks.
And what they really hate is that, after their subscription, the rules of the game are changed. However, this is a main characteristic of state intervention …
And even further, a good example is cited in the article: the Bong Iron Ore Mine where the government-backed CAD Fund indeed must act as the Chinese State wishes …
Such decisions are weighting on the issue price and the succes of the subscription.
Fear of the risks when investing in Africa seems to me to be rather secondary. On the contrary, when I see the Chinese explosion of business deals in Africa (where risks are not assessed and are not hedged and overpricing is often occuring) that seem to me examples of reckless investments …
But for the CAD itself it makes probably little difference where the money is coming from. Speaking about the current instalment: ("It plans to get its next $ 2 billion from parent China Development Bank Corp., he said.Chi said the next $ 2 billion or funding will probably be completed by the next Forum on China-Africa Cooperation, which should be held before the end of 2012. From a point of view of a money manager, the more simple the funding, the better, "Chi said. "We think CDB investment is the simplest.").


And then we arrive at the "Bong Bong versus Iron Ore Mine Company (BMC)" point.
Again the way I see it on basis of the available information:
China Union signs in december 2008 a contract with the Liberian State for restarting the iron ore mine in Bong. China Union Investment Cy is a joint venture of 5 private companies and already they received the help of the State ( “The China Development Bank is key in the US$2.6 billion China Union (Liberia) Bong Mines Investment, which was formally launched over the weekend”) in 2007 and presumably just for this project. Hua Zan Investment Group is the main shareholder and it is the topper on the list of "Best 500 private Chinese enterprises". On the website of this company China Union is still mentionned with just this Bong project.
As usual for fiscal and other reasons screen companies are founded (China-Union Hong Kong Mining Cy Ltd en China-Union Investment Liberia Bong).

But despite a fast start the China Union shareholders can not reunite the required capita. Sorry; having regard to the extent of the Hua Zan group, I would say: “do not want". Probably because of the collapse of the iron ore prices on the world market.
And given the fact that premier Wen Jiabao guaranteed presidente Ellen Johnson-Sirleaf in Charm el-Cheikh during the African Forum that China Union Investment Cy has the necessary funds, the CAD Fund had to intervene to save faces…
When she later spoke with premier Wen about the failure of China Union she got him to promise that the China Development Bank would bankroll China Union.

But this only after the CAD had put sufficiently pressure on Liberia. ("CADF assumed 85 percent of the project and negotiated a settlement with the Libyan government, making the project [Liberian] more appealing to potential Chinese buyers").
This because the Chinese steel sector was in a bad shape.
"The troubles afflicting Chinese steel makers are most dramatically reflected in their expansion plans as they move from pig iron to pig farming. Wuhan Iron & Steel, China's fourth largest steel producer, is now raising pigs, in addition to farming fish and organic vegetables, in a bid to bail out its core business.
Chinese steel companies are diversifying out of steel and into anything that will make money. In January, the country's biggest steel mills incurred losses or 80 billion yuan, and most analysts expect more 2.3 red ink. "
It was also the time of the fight over long term or spotprice contracts and the steelmaking SOES were commissioned to become self-sufficient in iron ore.
"To avoid its dependence on traditional countries like Australia, Brazil and India, China Iron and Steel Association has set a new target to increase Chinese overseas mining rights for iron ore in the next five years. It aims to get 50% of iron ore from mines whose rights are owned by Chinese steel companies, up from the current 15%. "
"We aim to be self-sufficient in iron ore supplies in three to five years," Deng Qilin, chairman of Wuhan Steel, said in March 2010.

A little bit later CADF could sell 60% of Bong Iron to Wuhan Steel and so 3 Chinese entities possess 100% of Bong Iron Ore.
The downside, of course, is for the traditional suppliers: "Nearly half of India's iron ore exports to China are in serious danger of being wiped out. The local government has imposed a ban on import of low grade iron ore while major Chinese companies are buying up ore mines with two billion worth of reserves in Africa. " Low grade iron is also the main production in Bong.
For comparison, lets make a leap back in time:
In 1957, the "Bong Mine Company BMC" was founded.
The mine remained active up to and during the civil war in Liberia and in 1990 the last foreign workers fled with a part of the stocks when soldiers of Charles Taylor came in the neighbourhood.
It is surprising to read how the approach of BMC was very similar with the current Chinese re-opening project and so it is the umpteenth colonial project that China restores in Africa.
Training, housing, roads, railway, a powerstation, a port …
All this was provided for 3,000 Liberians and 500 Europeans …. Same figures for the Chinese project now.
Just a Chinese business golf and aero club is still missing…

The only difference beeing is that it used to be Germans and Italians who were in charge and now Chinese and that's understandable when you know that BMC was a consortium of the German steel companies led by Thyssen and the Italian Finsider. Thyssen owned namely 75% in Delimco and its partner Finsider 25%.
And Delimco owned 50% in the Bong Mine Cy BMC.
And the other 50%?
Well, half a century ago the Liberian State was strong enough to claim the other 50% from the profits….
dan

As usual, lots here from Dan. I'll just add that for me, the return to Bong Mines is only a "colonial" project if you see multinational investment as always "colonial". I visited Bong Mines several times in the 1980s. It was an enclave, white-dominated, with a railway dedicated to the mine, not to passenger traffic. But this is the case with mining projects around the world -- they tend to be enclaves, with a small coterie of resident experts living well and large numbers of local miners with a lot less. Of course for all its economic decline, Johnstown, Pennsylvania still looks better than Nimba County. Liberia.