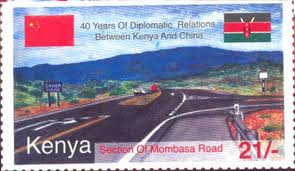 On Friday last week while I was in Nairobi at a World Bank event on China and fragile states, The Star (Nairobi) published an insightful article by Chinese engineers Su Wu and Kou Yang. I've noted in The Dragon's Gift how China's policy banks have followed the "request-based" financing model made famous by Japan. This article shows how Chinese companies are trying to educate Africans about ways in which they can afford to have [more Chinese companies] build their infrastructure. I especially like this because it combines my two interests: China/Africa, and Taxation and State-Building.  A hat tip to Paul S. Rogers.

Most of African countries are under developed and unable to afford the construction of infrastructures. Therefore, the establishment of a proper taxation system that will enable the collection of adequate capital for infrastructure is naturally a subject quite valuable for studying.
The importance of a good infrastructure in development cannot be over-emphasized. However developing such an infrastructure requires huge sums of money. Building for instance the 1412km road from Lamu Port of Kenya to South Sudan, requires about $ 2.118 billion.

Setting aside such a huge amount of money from the national budget will surely result in a big deficit and unfavourable effect on the economy. So it is wise to apply [for a] loan for the construction with expected profits of the road as mortgage.
The Lamu-South Sudan road snakes through the underpopulated northern districts of Kenya to South Sudan. Once the project is complete, Kenya will benefit from it in several ways. Various forms of trade will spring up along the road leading to increased GDP and revenue of Kenya. Most importantly, goods imported by South Sudan will be offloaded at the Lamu Port and transported through this road.

The cars travelling this road will bring in revenue through fuel levy. Besides, the road will save time as well as the cost of transport. For example, it usually takes three days for a container to reach South Sudan but that will reduce by a day on the new road.

Furthermore, the road, because of its good condition, will save at least 20 per cent in fuel and decrease the expenditure of repairing vehicles. Overall, the project once complete will play a significant role promoting economic development. Consumers will also benefit a great deal because the prices of goods and services will go down by as much as 30 per cent. Part of this can be taxed and used to repay the loan borrow to build the road.

Taxation can be conducted through tolling, increasing import and export tax and special infrastructure construction fund. For the Lamu Port- South Sudan road, tolls can be set up at the borders between two countries; special fund for roads can be imposed at the inland port along the border; and custom duty at inland port can be increased.

The amount of taxation on infrastructures is determined by the construction cost, repayment period and the amount borrowed. If the loan is $2.118 billion with a 15-year repayment period and 4 per cent interest rate, then $94.568 million for each six months and $2.837 billion in total shall be repaid.

Secondly, the cost of time and transport saved, which can be estimated based on the total quantity of goods imported from Uganda and Kenya, shall be taken into consideration. Thirty per cent of the saved cost shall be the taxation amount.

Thirdly, compare the taxation amount and the $94.568 million due to repay for each six months. The project is feasible when the taxes are more than the loan repaid under the agreed duration. And now the detailed taxation standards can be finalised. In short, reasonable taxation is a good way to speed up construction of infrastructure and boost economic development.

*The writer is an engineer with China Railway Number Five Engineering Group.
Posted by Deborah Brautigam at 8:35 AM