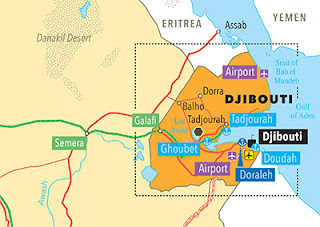 As always, if someone has better information, please comment here or contact us directly at SAIS-CARI at Johns Hopkins University.
Posted by Deborah Brautigam at 10:51 AM

I read the article and was struck by the claim as well. In my view, it is a good example of sloppy journalism. The journalism needed a source and instead of doing some digging to get the facts he asked (lets hope) some government official who then just made some stuff up!

Well, maybe it was just an unfortunate use of the plural for shock value. Considering Djibouti's external debt doubled in 3 years and is approaching 100% of GDP, there is plenty of reason to worry even with a single billion. From the look of it Chinese financing was responsible for this increase. Had this questionably "irresponsible" lending been offered by another country, would it have been deemed worrisome by the NYT's source? The strategic value of Djibouti to the US and its allies never really depended on the country's economic stability in the past. So one has to conclude that it's all about rivalry over access to and influence over one of the most important geostrategic spots on the planet.

The strategic value of Djibouti to the US and its allies never really depended on the country's economic stability in the past. So one has to conclude that it's all about rivalry over access to and influence over one of the most important geostrategic spots on the planet https://www.informativoangolano.com