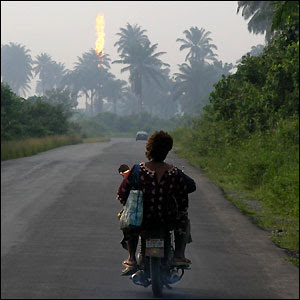 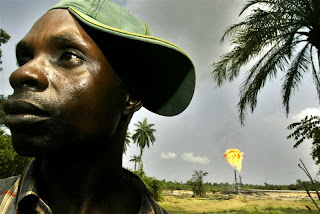 It's quite obvious yet mysterious to me that President Yar'Adua seemed don't like to do business with China. From CNOOC's offshore oil concession bid, to $7b railway rehab project, to this hydropower project, all initiated by President Obasanjo but encounter problem after President Yar'Adua took power. The lesson to China on doing business is that,to rely too heavily on personal relationship (Guanxi) has its drawbacks. Would be interesting to watch the election in Zambia next year, while opposition leader Michael Sata threated to cut ties from China.

Because of financial and political spoils, signing a contract for a big infrastructure project is more attractive than actually building and operating it. This is one reason why so many deals are announced but then never materialize. I posted a post on Mambilla and corruption on my blog two years ago. An excerpt is below. You can read the full blog at www.internationalrivers.org/en/node/2588

Lahmeyer was supposed to carry out its Mambilla contract within 15 months, and collected $3.2 million for it. Yet nothing happened on the ground. The company only set up a bungalow near the future dam site, to create the appearance of project activities. The parliamentary committee which is investigating the matter claims that Lahmeyer has never even visited the project site, and asked the company to refund the money it received. (…)

Approving new projects is so lucrative that powerful politicians try to reserve decision-making powers for themselves. Under President Obasanjo, the technical experts of the energy ministry were kept out of the loop on new power plants. All decisions were taken by a committee which included the President and several influential ministers and state governors. Many contracts were awarded without competitive bidding. Some contracts were awarded to companies headed by former presidents and other powerful figures, and $50 million was paid to companies which did not even exist.

In the case of Mambilla, an earlier president had already awarded construction contracts in 1982, but nothing happened on the ground. The large project was so attractive that President Obasanjo created and chaired a special committee on Mambilla a few weeks before the end of his tenure. The President handed a new contract to China Gezhouba Group Corporation, the main builder of China’s Three Gorges Dam. The only other thing which has so far happened was a ground-breaking ceremony to inaugurate the project – the kind of ribbon-cutting event that publicity seeking politicians love.

This is fascinating, Peter. I remember your discussion of Mambilla. This makes a great deal of sense to me. I think the problems in Nigeria are not so much that Yar'Adua didn't like to do business with China, as much other business continued. The problem, I think, was with the murky oil-for-infrastructure set up. It could work, but it clearly didn't. Again, the Chatham House report details all of this in a very interesting way.

DB, why oil-for-infrastructure wouldn't work in Nigeria if it worked in other African countries? You know Sudan's Merowe dam has been inaugurated, Angola's railway is being rehabilitated, and DR Congo is also in hope of following this successful path. Is it something special in Nigeria?

I recently came across your blog and have been reading along. I thought I would leave my first comment. I dont know what to say except that I have enjoyed reading. Nice blog. I will keep visiting this blog very often.

It seems the wind turns again.

A major step in the nation's quest for self reliance in petroleum and associated products production was taken yesterday when the Nigerian National Petroleum Corporation (NNPC) and China State Construction Engineering Corporation Limited (CSCEC) signed an agreement for the joint sourcing of funds for the construction of three Greenfield refineries and a petrochemical plant estimated to cost $28.5 billion.

Pretty interesting comments! I wonder if there is a follow up and update..?