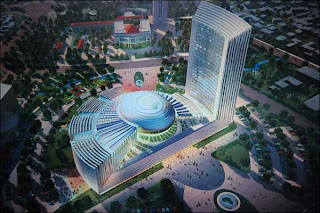 A couple of days ago, Yoon Jung Park at Howard University forwarded a very thoughtful article by Howard University grad Chika Ezeanya, reacting to the just-opened $200 million African Union headquarters building in Addis Ababa, a "gift" from the dragon. Her mixture of frustration and disgust at the symbolism of the African Union accepting the donation of this building was almost tangible and very nicely phrased.

But one thing about her article caught my eye: the statement that 90% of the labor on the building was Chinese.

I was in Ethiopia in February and November, and both times, it was clear to me that there were a lot of Ethiopian workers on the site. Other construction projects I visited overwhelmingly conformed to the usual pattern of Chinese managers and Ethiopian workers. But if this figure was firm, I wanted to add it to my collection of anecdotes-into-data on Chinese workers in Africa.

So I asked Chika about her source. She had heard the figure on the radio, but she directed me to two other news reports.

One, from The Global Post, said "Construction began three years ago by the China State Construction Engineering Corporation, using building materials largely brought from China, and a mix of Chinese managers and Ethiopian laborers." That's what I would have expected.

The other, from Voice of America, said the exact opposite: "It was built by the China State Construction Engineering Corporation, largely with Chinese labor." (This article also made the comment that "Industry experts say 70 percent of the continent's oil exports go to China." Ahem. The real figure is closer to 13% of African oil going to China (2009), compared with the US and Europe, each about 33%.) This put a twinge of doubt into my mind about the VOA author's credibility.

An Al Jazeera story that said it was "all" Chinese labor. (hat tip to Michael Lee for that one).

So, next step. What do Chinese sources say? Tang Xiaoyang did a quick search for me, and found two articles in the Chinese press. A Xinhua story of July 2010 said that there were "nearly 200 Ethiopians and over 200 Chinese" in July 2010, and another report in December 2011 said that 900 workers were hired at the peak, and that "the Chinese trained Ethiopian construction workers in a 1:1 ratio (一比一)."

Back to Michael Lee, who unearthed a China Daily story, which includes an interview with Zeng Huacheng, the Chinese project manager. Zeng said at the peak there were 1500 workers, normally they had around 1100, and that it was 1/2 Chinese and 1/2 Ethiopian. You'll see a lot of each on the video.

Why are there more Chinese working here than the norm I've seen, of about 20 Chinese to 80 Africans, on average? I imagine it has something to do with the political importance of the project, and the fact that it was financed as a grant, not a loan. The Chinese wanted to be sure it was done on time, and that it reflected a high standard of quality. And as it was financed by the Chinese as a donation, the Ethiopians probably waived their normally strict work permit requirements. Finally, as an aid project, it has to reflect "mutual benefit". Using Chinese materials and labor (half) provides some benefit to China ... not to mention the longer benefit of having the AU members meet in a stunning modern building donated by Beijing.
Posted by Deborah Brautigam at 6:08 PM