The Chinese in Africa: The Economist Gets Some Things Right, Some Wrong 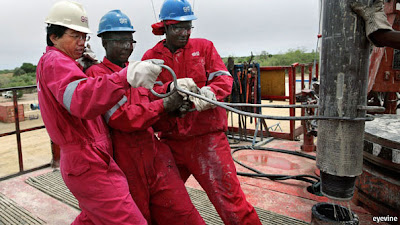 The Economist's April 20, 2011, report on China and Africa (with the catchy subtitle "Africans are asking whether China is making their lunch or eating it") gets a lot of things right, but some big things wrong. As I noted in an earlier post, it is also prone to exaggeration.

What the reporter, Oliver August (he emailed me while he was working on the article but I was in Ethiopia and we never managed to talk), got right was a generalized sense that lower standards, lack of "corporate social responsibility" (social and environmental) in business practices, poor labor relations, competition with import substitution industries (especially textiles), and not enough hiring of local labor are the downside of China's increasingly prominent presence in Africa. These are serious issues and rightly tarnish the general reputation of China in Africa. I've written about them all in The Dragon's Gift.

Here's my take on what they got wrong and/or exaggerated:


1. The Economist: "For investment in African farming, China has earmarked $5 billion. A lot of Africans view this anxiously."

Wrong: Sigh. This myth is a hard dragon to slay (so to speak). I wrote about the legend of the (non-existent) $5 billion fund for agriculture here in April 2010 after reading Howard French's Atlantic article that made this surprising and erroneous claim. Yes, China Africa Development Fund plans to raise $5 billion for Chinese equity investment in Africa (they've raised only $1 billion so far), but this is going into all sectors: infrastructure, manufacturing, energy, mining, and agriculture. The mistake that this fund is devoted to agriculture has become one of the urban legends circulating around the internet, a "rural legend" we could call it.


2. The Economist:  Chinese construction work can be slapdash and buildings erected by mainland firms have on occasion fallen apart. A hospital in Luanda, the capital of Angola, was opened with great fanfare but cracks appeared in the walls within a few months and it soon closed. The Chinese-built road from Lusaka, Zambia’s capital, to Chirundu, 130km (81 miles) to the south-east, was quickly swept away by rains.

Exaggerated: I've analyzed stories about the Luanda hospital and the Lusaka-Chirundu road before in this blog. True, both had problems (the hospital was opened in February 2006 but rather than "falling apart" in a few months, it developed significant cracks over the first four years, and closed for repairs in June 2010). The Economist implies that the entire Lusaka-Chirundu road was "quickly swept away by rains". This did not happen but the road did develop a cave-in along what appears to be a 20 foot section. For more on this from several Chinese, Africans, and others see the comments on my post.


3. The Economist: At Chinese-run mines in Zambia’s copper belt they must work for two years before they get safety helmets. Ventilation below ground is poor and deadly accidents occur almost daily. To avoid censure, Chinese managers bribe union bosses and take them on “study tours” to massage parlours in China. Obstructionist shop stewards are sacked and workers who assemble in groups are violently dispersed. When cases end up in court, witnesses are intimidated.

Exaggerated.  Let's look first at the claim of deadly accidents occurring "almost daily" in Chinese-run copper mines. It took about five minutes of searching on the internet to find what appear to be fairly good statistics on all fatalities in the copper belt, not just the Chinese. For example, here is a table from a critical 2008 South Africa Institute for Security Studies study of Zambian copper mines by Neo Simutanyi:

All Mining Fatalities in the Copperbelt

Although the data stops in 2006, it covers the worst years with regard to Chinese safety practices (see below). A 2009 Norwegian academic study of an unnamed international copper mining firm in Zambia (not the Chinese company) reported that it had experienced 20 fatalities between January 2005 and May 2007. Any fatality is one fatality too many, but it does no favor to our efforts to understand the reality of Chinese engagement to exaggerate their record.

I didn't look into the massage parlour claim (sounds plausible) but on the other safety aspects I asked Dan Haglund, a British scholar who has done extensive fieldwork on the Chinese copper mines. He was unaware of any practice that miners "must work for two years before they get safety helmets." He told me "the first Zambians working at NFCA after it started operating in 2003 may well have had very limited safety equipment during the first couple of years. However employees as well as regulators agree that standards have improved significantly since then - albeit from a low base." From another researcher, I learned that the Chinese in the copper belt do issue required safety equipment on a regular basis, but are reluctant to replace boots or helmets that are damaged before the scheduled replacement period.

About court cases, Dan Haglund reported that in his experience, the Chinese in the copper belt tended to ignore many labor regulations, for example, they would dismiss personnel without giving notice. However, he said, "my impression is actually that the court usually rules in favour of the workers. The Company Secretary said that this was one of the company's concerns regarding operating in Zambia - saying that in Zambia, if there is a dispute, the courts will always rule in favour of workers."

Perhaps due to an editing error, The Economist combined discussion of the improving Chinese state-owned companies in the copper belt with the poor record of the private firm running the Collum coal mine in southern Zambia (which is where the notorious mine shootings took place in 2010). (For deeper discussion and links to stories on the shooting at Collum coal mine, see my earlier blog post.)


4. The Economist quotes (without comment) Sanou Mbaye, formerly a senior official at the African Development Bank, who said "more Chinese have come to Africa in the past ten years than Europeans in the past 400."

Exaggerated/Wrong. A nice quote but without being unkind, I venture to say it is complete balderdash. No one has figures on how many Chinese have come to Africa. We often hear estimates of 750,000 or a million, or even more. But any estimate pales in comparison to the numbers of Europeans who came to Africa during colonialism and who live and work there even today. Nigeria and South Africa are favorite destinations for Chinese traders and immigrants. And there may be more Chinese than Europeans in Nigeria. But could anyone who lives in South Africa or visits frequently, as I do, claim that there are more Chinese than Europeans in the airports, or even on the streets of South African cities and towns?

Estimates of Europeans in Africa during the colonial period vary, but a long and pretty well documented Wikipedia overview of "White Africans of European Ancestry" might surprise Mr. Mbaye. The article estimates that the population of Europeans in Africa rose to perhaps 10 million during the colonial period, and remains (at most) at 6.5 million. While I will leave it to others to examine the sources, the article cites research claiming that in South Africa in 1995, there were some 5.2 million "Europeans" while Algeria had over 1.6 million Europeans in 1960, the Portuguese colonies in Africa had some 650,000 Portuguese before independence, Libya had over 150,000 Italians; Tunusia and Morocco had 750,000 Europeans, at the peak there were some 296,000 Europeans in Zimbabwe.


5. The Economist: Suspect above all is the type of transfer that China offers to African countries. Most loans and payments are “tied”—ie, the recipient must spend the money with Chinese companies. (Japan, Spain and others followed a similar model until fairly recently.) But tied aid leads to shoddy work. With no competition, favoured firms get away with delivering bad roads and overpriced hospitals. Creditors and donors often set the wrong priorities.

Exaggerated/Wrong. Yes, Chinese aid and export credits largely appear to be tied. Yes, donors from the OECD agreed to progressively reduce their own requirement that official aid to the poorest countries be tied. But as a 2011 analyses by the OECD pointed out, while aid is increasingly untied in theory, it doesn't seem to be untied in practice: most contracts still go to donor countries' own firms. This was also the conclusion of an independent study funded by Denmark: "Untying Aid: Is it Working?. (For a fascinating blog post by Laura Freschi  at Aid Watch on the "unsung hero" of the struggle to get the US to even report how much of its aid is tied.)

However, this discussion of "tied aid" is beside the point: what the Chinese are primarily providing to African governments is not aid, but commercial-rate export credits. And no OECD country provides untied export credits. That would defeat the purpose of this government tool for increasing exports. Members of the Development Assistance Committee at the OECD reported in 2009 that they had committed $24.8 billion in "other official flows"* to developing countries (this is in addition to official aid). We don't have a "tying" report for these transactions, which are the appropriate comparison for the Chinese non-concessional official flows.


6. The Economist: The Democratic Republic of Congo was persuaded at the last minute by international advisers to scale back a Chinese lending facility from $9 billion to $6 billion.

Exaggerated/Wrong. This sounds as though international advisers came in "at the last minute" as the DRC was about to make a huge mistake. What really happened was a stand-off lasting nearly two years between the DRC and its creditors, which were refusing to consider debt reduction for the DRC unless it reduced the size of (and official guarantees for) a Chinese credit package linked to a joint venture mining investment. What this meant for the DRC (in addition to a lower debt) was that the benefits it will get from the Chinese consortium in exchange for the mining rights were reduced by $3 billion. (The mining venture was going to finance $6 billion in reconstruction infrastructure projects, unlinked to the mine, in addition to $3 billion for the mine). For more on this complicated story, see this note by researchers Johanna Jansson and Wenran Jiang for Pambazuka.

I'm leaving for a CSIS/CIIS meeting in Beijing tomorrow and then on to conferences/speaking engagements in Brussels, Copenhagen, and Dresden. Thanks to the Great Fire Wall, likely won't be blogging again for awhile, but I'll be interested in readers' comments on my take on The Economist.

------------
*other official flows: "Other official flows are official sector transactions which do not meet the ODA criteria, e.g.: i.) Grants to developing countries for representational or essentially commercial purposes; ii.) Official bilateral transactions intended to promote development but having a grant element of less than 25 per cent; iii.) Official bilateral transactions, whatever their grant element, that are primarily export-facilitating in purpose. This category includes by definition export credits extended directly to an aid recipient by an official agency or institution ("official direct export credits"); iv.) The net acquisition by governments and central monetary institutions of securities issued by multilateral development banks at market terms; v.) Subsidies (grants) to the private sector to soften its credits to developing countries [see Annex 3, paragraph A3.5.iv)b)]; vi.) Funds in support of private investment." Source: OECD/DAC Statistics.
Posted by Deborah Brautigam at 11:07 AM